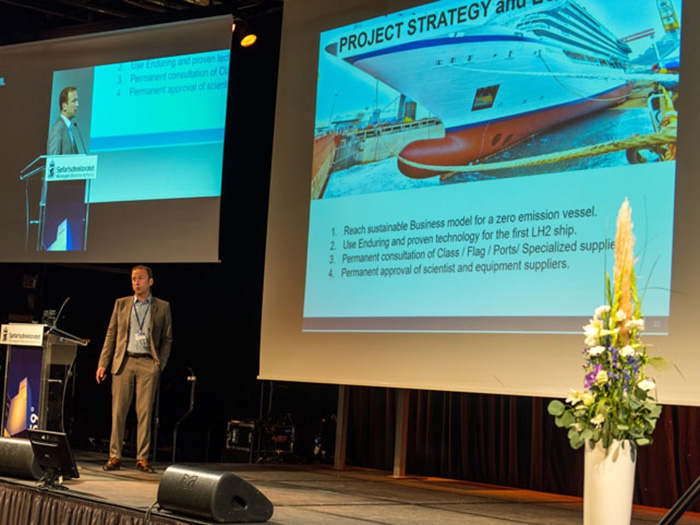 OCTOBER 3, 2017 — Viking Cruises is working on a project that could lead to construction of the world’s first cruise ship with zero-emission technology. It would be be fueled by liquid hydrogen.

Viking Cruises’ project manager Serge Fossati told the Norwegian Maritime Authority Safety at Sea conference in Haugesund last week that the hydrogen-powered cruise ship might be modeled on the same design as Viking Cruises most recent vessel, the Viking Sun. It would be around 230 m long and accommodate more than 900 passengers and a crew of 500.

“This is a world sensation. Very exciting. If they pull this off, a distribution network may be established, which will enable others to also use hydrogen as fuel, and could contribute to a zero-emission shipping industry,” says Norway’s Director General of Shipping and Navigation, Olav Akselsen.

Viking Cruises, which has registered several new cruise ships in the Norwegian International Ship Register (NIS) would also register the hydrogen ship in the NIS if it is built, and is already in discussions with the Norwegian Maritime Authority.

“At Viking, we have always endeavored to look forward and to be at the forefront with regard to green shipping. As a Norwegian and with Norwegian ships, we want to lead the way to zero-emission ships through fuel cell technology. The road to that point is still long, but here at Viking we want to be ahead of the game,” says Viking Cruises Chairman, Torstein Hagen.

Thus far, liquid hydrogen has not been used as marine fuel. Among the technical challenges is maintaining the fuel at minus 253 degrees C to keep it from evaporating. A fuel cell would convert the hydrogen to electricity for propulsion and electric power on board. Hydrogen is also a very explosive gas, and protection against gas leaks is an important part of the safety requirements for the fuel.

“The ship will fly the Norwegian flag, which means that we have to vouch for the safety being just as good as on conventional ships,” says Mr. Akselsen. “We believe that it is possible to solve those issues. We probably have a way to go before all the technical solutions are in place, but this is a very concrete project which has a high priority at Viking Cruises”

At present, liquid hydrogen is not produced on a large scale in Europe, but Mr. Fossati explained that Viking Cruises is in dialogue with Statoil in order to find a solution based on a Norwegian refinery. It also emerged that the shipping company wants to use Norwegian suppliers for the project, as far as possible. Several tender ships to carry the fuel to the cruise ship are also part of the project.