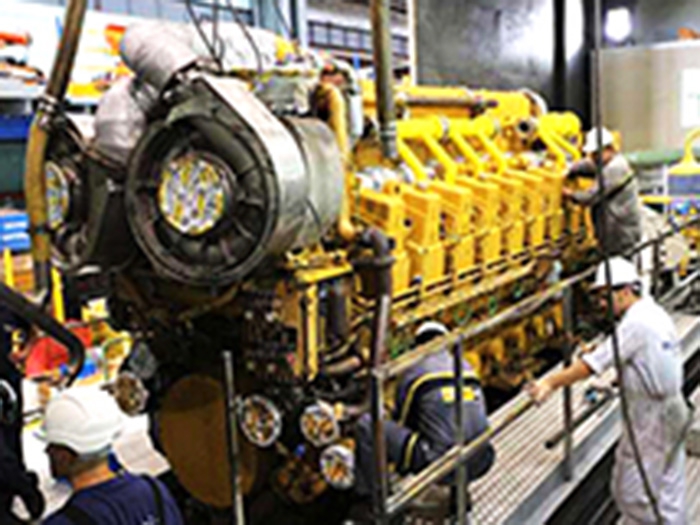 MARCH 6, 2017 — A plan by Spain’s Fred. Olsen S.A. to convert all four engines of its 96 m Incat wavepiercer Bencomo Express to dual fuel LNG operation has passed a major milestone.

The ferry first entered service in October 1999 on the route between Agaete (Gran Canaria) and Santa Cruz de Tenerife. It is to be converted to dual fuel operation as part of the EU Project “GAINN4SHIP INNOVATION: LNG Technologies and Innovation for Maritime Transport for the Promotion of Sustainability, Multimodality and the Efficiency of the Network,” which is co-funded by the EU’s Connecting Europe Facility Program.

Fred. Olsen S.A. chose Heinzmann as a competent and innovative supplier of dual-fuel systems and while Graz, Austria, headquartered AVL, a specialist in development of complete powertrain systems, was retained to executie engine design, simulation, test bed planning and performance and emission development.

On the test bench extensive performance, emission and reliability tests were successfully carried out by AVL followed by DNV-GL approval testing. Heinzman says that fuel consumption was noticeably reduced with emission reductions of 30% CO2, 50 % NOx and 90 % SOx being possible burning 90% LNG and 10% MGO.

The dual-fuel conversion was done in such a way that the diesel injection system itself was not modified, allowing unrestricted diesel operation at any time if necessary. Heinzmann says a precise multi-point gas admission system is installed as a cost effective “add-on” solution and is based on type approved components in a double-walled configuration.

The dual-fuel system is operated by the latest version of Heinzmann’s MVC 01-24 EFI-controller, actuating specially developed, double-walled Megasol 200 II gas admission valves. This offers a very flexible system configuration in order to achieve the best possible adaptation for any application. Together with an intelligent air path management controlled by Heinzmann’s wastegate valve WG 70, it was possible to operate the engine on up to 90% LNG.

An Ariadne Knock Control System was installed to operate the converted engine at the highest efficiency limits.

Special attention was paid to the transient behavior of the engine.

Heinzman says that the switch over from diesel to gas and back occurs smoothly and quickly. In case of gas system failure, the system returns to diesel immediately.

All four engines of the Bencomo Express are expected to be converted to LNG next year. Further vessels are to follow.