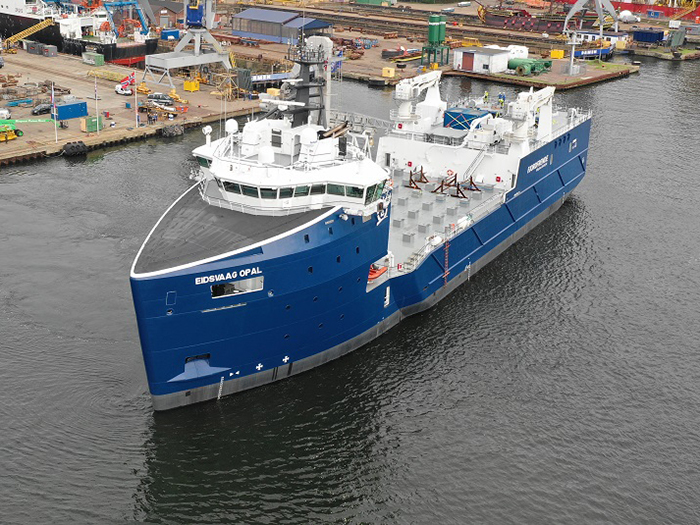 Vessel emerged from conversion both longer and beamier [Photo: Damen]

Now renamed Eidsvaag Opal, the vessel was one of six built by Damen for offshore supply company World Wide Supply and was delivered in 2013 as the World Opal.

Among other things, the conversion involved cutting the hull in two and lengthening the vessel by 5 meters by inserting new steel sections. Damen was also required to widen the beam of the vessel—using a series of side boxes—to give added stability and cargo capacity.

Additionally, the yard integrated 35 new silos and a large feed bag hold, enabling Eidsvaag Opal to transport up to 2,800 tonnes of fish feed.

The project involved considerable electrical work. Carried out by FMJ Marine Automation, this included removing some 480 cables—approximately 15 kilometers—from the old cargo systems alone. In total, the company pulled 51 kilometers of cable and connected 1,237 cables on the project.

Damen Shiprepair Amsterdam won the tender to carry out the conversion partly due to its close proximity to Niron Staal—Damen’s specialist steel fabricator. Another factor in the award of the tender was Damen’s previous conversion experience for the aquaculture sector and the fact that the company knew the vessel—having built it back in 2013.

The project required considerable steel work, totaling 875 tonnes. The conversion took on an additional layer of complexity with the arrival of the coronavirus epidemic. This required the shipyard to cease work for one week to implement robust safety measures after which the project was able to continue with minimum danger to health. Despite the need to socially distance during work on the project, work continued at a good pace—taking in total 346 days.

In week 43, the Eidsvaag Opal underwent her first loading in order to test the new system. The test involved the vessel carrying 180 tonnes of feed in the silo and 55 tonnes in big bags. Loading went well, requiring only small adjustments to the loading equipment in the big bag room. The feed was unloaded at a fish farm close to Tromsø, at which point the capacity and quality was approved by the product owner. In week 44, a bigger load was transported for the second test—some 700 tonnes.

Damen Ship Repair Amsterdam senior project manager Arjan de Vos explains, “Naturally we were very concerned with the well-being of everyone working on the project and had to take the time to implement safety measures. This proved to be very effective and not only were we able to continue the work, but we did it in good time. I’m very pleased with the way that we have risen to the challenge presented by the pandemic as a team and been able to continue to safely serve our clients during this time.”

The vessel will be operated by Eidsvaag in the Fjordfrende collaboration in which Skretting and Cargill, competitors in the fish feed market, are cooperating on outbound logistics, As a result, the CO2 emissions of both companies will be reduced by one fifth, some 10-20 million kilograms of CO2 per year.