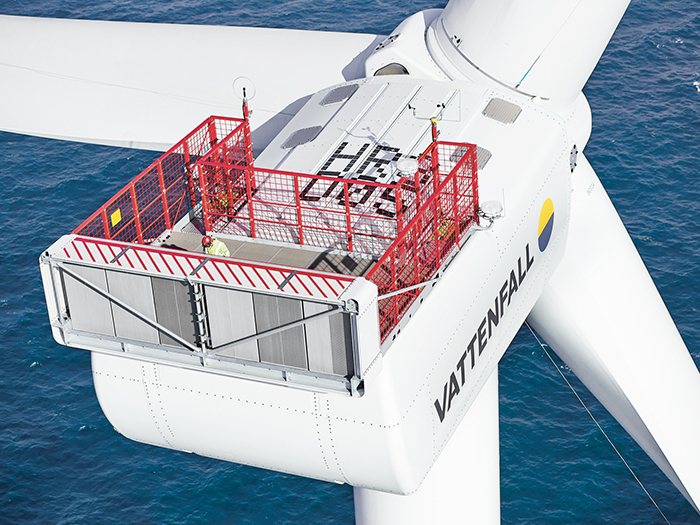 The total height of the 8.3 MW MHI Vestas turbines installed at Horns Rev 3 is 187 meters each and each turbine weighs close to 1,500 tonnes including foundation

The 49 wind turbines on Horns Rev 25-40 km off Denmark’s west coast in the North Sea will increase the Danish power production from wind with around 12 per cent. Enough to power the yearly consumption in 425,000 Danish households.

“Horns Rev 3 is the largest offshore wind farm in Scandinavia and shows our commitment to Denmark’s ongoing transition to a renewable energy system. The wind farm is a significant contribution to Vattenfall´s production portfolio and takes us one step further in our ambition to enable a fossil-free living within one generation”, says Magnus Hall, CEO of Vattenfall.

The first foundation for Horns Rev 3 was placed in the seabed in October 2017 and the first turbines began delivering electricity to consumers on 23 December 2018. During the construction phase, the turbines were shipped from the Port of Esbjerg but from 2024 they will be serviced from the Port of Hvide Sande, where Vattenfall will establish a new service hub.

“It has taken less than two years from the first foundation was built until the inauguration of Horns Rev 3. An impressive achievement of our employees and partners who now have completed the largest offshore wind farm in Vattenfall’s portfolio. It proves Vattenfall’s position as a leading offshore developer and our commitment to making offshore wind a corner stone in a future fossil-free energy system”, says Gunnar Groebler, Senior Vice President and Head of Business Area Wind in Vattenfall.

Vattenfall won the right to construct Horns Rev 3 with a historically low bid in 2015 and has since then continued its effort to deliver investments in renewables while maintaining profitability and low cost.

In addition to Horns Rev 3 Vattenfall is constructing the offshore wind farms Vesterhav Syd & Nord and Kriegers Flak adding a total of more than 1.4 GW wind energy capacity to the Danish energy system.

Horns Rev 3 will be Denmark’s largest offshore wind farm and boost the Danish electricity production from wind with around 12 per cent.

With a capacity of 407 MW Horns Rev 3 will cover the annual electricity consumption of approx. 425,000 Danish households.

The total height of the 8.3 MW MHI Vestas turbines is 187 meters and each weighs close to 1,500 tonnes including foundation.

The Horns Rev 3 wind farm is located in the North Sea 25-40 kilometres off the Danish West Coast.