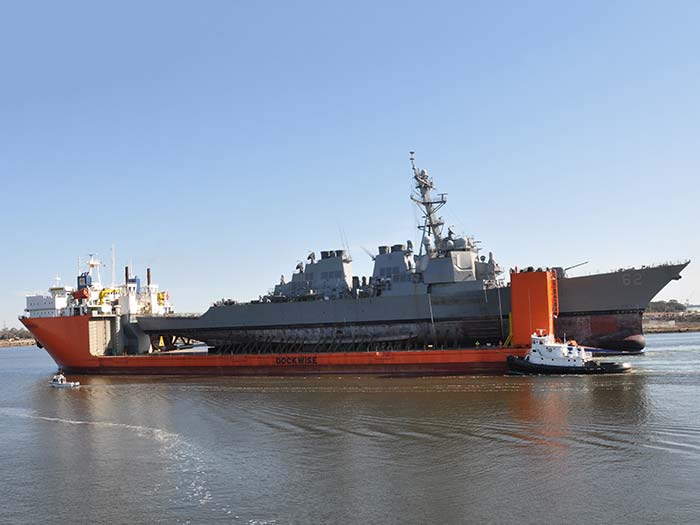 Fitzgerald was involved in a collision with the Philippine-flagged ACX Crystal June 17. Seven sailors lost their lives and the ship was damaged on the starboard side above and below the waterline.

The ship is to be repaired and modernized at Huntington Ingalls Industries Ingalls Shipbuilding division and, thus far, the Navy has awarded contracts totaling around $220 million for the work needed.

Today Ingalls was awarded a $125,136,069 cost-plus-fixed-fee modification to a previously awarded contract (N00024-17-C-4444) for the execution of emergent repair and restoration work on the vessel. Ingalls was previously awarded $63,000,000 contract modification to provide for the initial collision ripout phase of the work and, prior to that was awarded $29,378,128 for the initial planning and preparation phase of the contract.

Before being taken to its designated pier space at the shipyard, Fitzgerald is expected to spend several days in the Port of Pascagoula as the heavy lift ship undertakes the reverse operation of unfastening, lowering and guiding the ship off the platform.

The Navy says that due to the extent and complexity of the restoration, both repair and new construction procedures will be used to accomplish the restoration and modernization efforts.

Work on the ship is expected to occur on a land level facility throughout 2018 and one to two quarters of 2019, followed by an extensive test and trials period to ensure all systems and spaces are restored to full functionality and operational capability.

The entire restoration and modernization effort is expected to complete approximately 24-months after work on the ship begins.