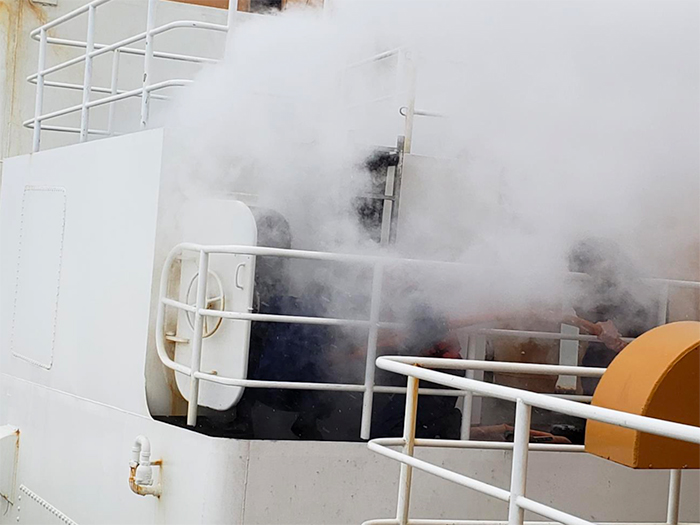 According to the Coast Guard, the incident occurred on the evening of Feb. 10, 2019. The cutter set General Emergency and its crew spent two hours battling the fire before it was extinguished.

Fire damage was contained inside the incinerator housing, while firefighting water used to cool exhaust pipe in the surrounding area damaged several electrical systems and insulation in the room.

Repairs are already being planned for the Polar Star’s upcoming maintenance period. The incinerator will need to be full functional before next year’s mission.

No injuries were reported, and the cause of the fire is under investigation.

“It’s always a serious matter whenever a shipboard fire breaks out at sea, and it’s even more concerning when that ship is in one of the most remote places on Earth,” said Vice Adm. Linda Fagan, commander of the U.S. Coast Guard’s Pacific Area. “The crew of the Polar Star did an outstanding job – their expert response and determination ensured the safety of everyone aboard.”

NOT THE ONLY INCIDENT

The Feb. 10 fire was not the first engineering casualty faced by the Polar Star crew this deployment. While en route to Antarctica, one of the ship’s electrical systems began to smoke, causing damage to wiring in an electrical switchboard, and one of the ship’s two evaporators used to make drinkable water failed. The electrical switchboard was repaired by the crew, and the ship’s evaporator was repaired after parts were received during a port call in Wellington, New Zealand.

The ship also experienced a propeller shaft leak that halted icebreaking operations while scuba divers weht into the water to repair the seal around the shaft. A hyperbaric chamber on loan from the U.S. Navy aboard the ship allows Coast Guard divers to make external emergency repairs and inspections of the ship’s hull at sea.

The Coast Guard has been the sole provider of America’s polar icebreaking capability since 1965, and is seeking to increase its icebreaking fleet with six new Polar Security Cutters in order to ensure continued national presence and access to the Polar Regions.