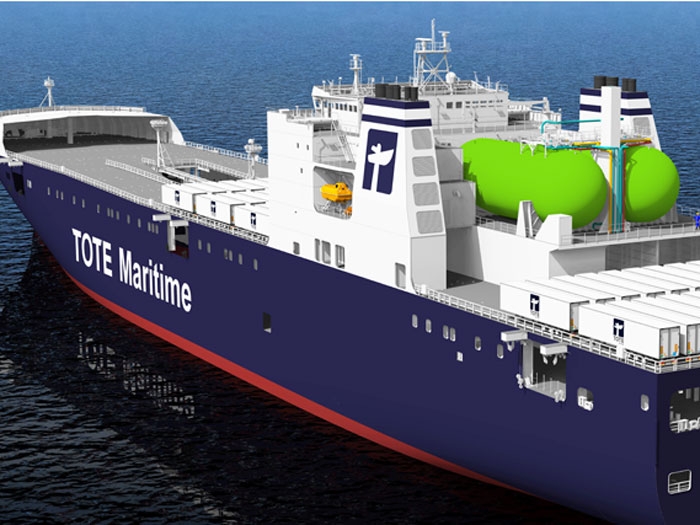 NOVEMBER 9, 2015— The tragic October 1 loss of the El Faro means that TOTE Maritime is having to delay the planned conversion of the first of two “built for Alaska” 839 ft Orca Class RO/RO vessels to LNG fueled propulsion.

The Orca Class Midnight Sun had been set to start a 90 day conversion in December in Singapore at Keppel Offshore & Marine Ltd’s Keppel Shipyard. The sister Orca Class ship, the North Star, was expected to be converted in the 2016/2017 time frame.

Plans were for the El Faro to replace the Midnight Sun on TOTE’s sailings between Tacoma, WA, and Anchorage, AK, during the conversion. Prior to being to transferred to Florida on 2006, the El Faro had previously served on the Alaska route as the Northern Lights.

Now, though, the Tacoma News Tribune reports that. without a ship to replace the Midnight Sun, Tote is delaying the conversion a year.

On the Puerto Rico run, El Faro has already been replaced by, the Isla Bella, the first of two newbuild LNG fueled containerships built for TOTE by shipbuilder NASSCO, San Diego.

The second of those ships will be delivered next summer, freeing up El Faro’s sister ship, El Yunque, to move to Tacoma while the Midnight Sun is retrofitted. Conversion of the second Orca Class ship, North Star, will also be delayed by a year and has been pushed back until winter 2017/18.

The News Tribune quotes TOTE Maritime President John Parrott as saying that the company is negotiating with the Coast Guard to win its approval for the delay in the retrofit, needed to meet new emission standards.