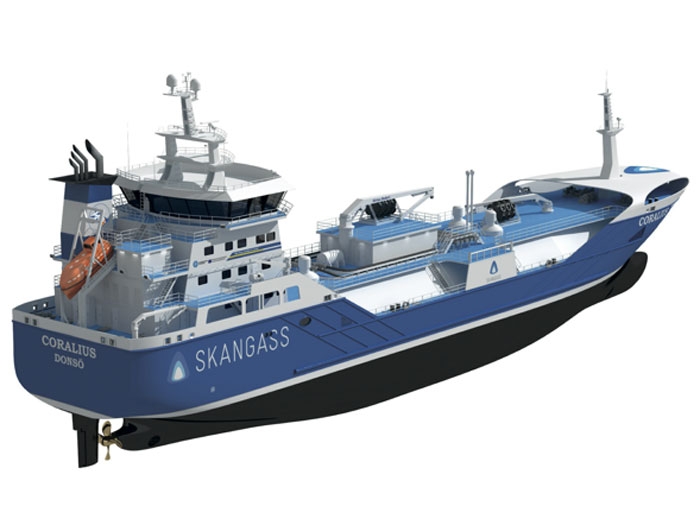 LNG bunker/feeder vessel will be first built in Europe

JANUARY 15, 2015 — Development of an LNG bunkering infrastructure in Northern Europe continues to move ahead. Sirius Veder Gas AB has ordered a state of the art 5,800 cu.m LNG bunker and feeder vessel from Dutch shipbuilder Royal Bodewes. The vessel will be the first of its type to be built in Europe and will be delivered from the shipyard in February 2017.

Sirius Veder, a joint venture between Netherlands headquartered Anthony Veder Group and Sweden’s Sirius Rederi, will operate the vessel for Skangass under a long term charter. The new vessel, to be named Coralius, will serve the increasing number of vessels using LNG as a marine fuel, thus reducing their CO2, NOx, SOx and particle matter emissions.

Since 2010, Skangass has expanded its LNG transport capacity at sea by entering long-term time charter contracts with Anthony Veder for the LNG carriers Coral Energy and Coral Anthelia.

Skangass says the vessel will provide easy access to LNG bunkering to customers and limit the operational impact of calling a port in order to bunker. During the design phase, great emphasis has been placed on the ship’s systems for ship-to-ship operation to ensure that she is optimized to perform LNG bunkering offshore.

“Recently, we entered into our first ship-to-ship bunker contract with NEOT in Finland. Building the new vessel Coralius is the natural step for meeting this demand, and further developing our marine LNG supply chain. Although we already satisfy our marine clients’ needs by truck-to-ship and terminals-to-ship bunkering, we need to further develop the infrastructure. By doing so, we will also be in a much stronger position to meet steadily rising demand for LNG,” says Tor Morten Osmundsen, CEO of Skangass.

Skangass says the Coralius will deliver LNG to marine clients in a flexible and safe way, offering excellent accessibility and high transfer rates to minimize bunker time. The increasing demand for LNG from marine customers can be attributed to LNG being a clean fuel that meets MARPOL Protocol regulations that require sulphur emissions to be lower than 0.1% in the ECA area (Emission Control Area).

In addition to supplying bunkers to LNG fueled ships, the new vessel will distribute LNG to areas that do not have access to natural gas via pipeline. It is expected to load LNG in Norway and Sweden for distribution in the Baltic area, with a focus on the Skagerrak and Kattegat area.

The vessel will have the highest ice class notation (1A), allowing it to trade in the Baltics during winter time.

The combined LNG feeder and bunker vessel is an important part of the establishment of an LNG infrastructure in the Skagerrak/Kattegat area and the Baltic Sea. This project is co-funded by the EU through the TEN-T program.