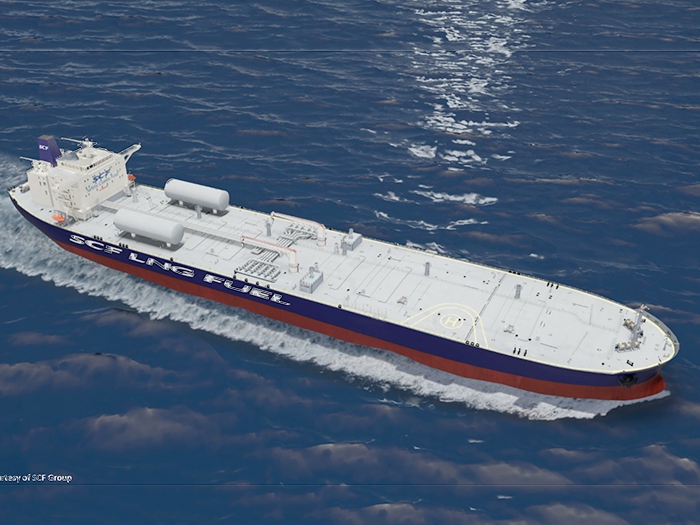 APRIL 3, 2017 — Shell Western LNG B.V. has signed an agreement with Russia’s Sovcomflot (SCF Group) to supply liquefied natural gas (LNG) to fuel the first Aframax crude oil tankers in the world to be powered by LNG.

The four Aframax tankers will operate in the Baltic Sea and Northern Europe transporting crude oil and petroleum products. The ice-classed, dual-fueled tankers are scheduled to come into operation beginning in the third quarter of 2018 and will be among the first LNG-fueled vessels with variable and flexible routes. More ship owners and operators are choosing LNG fuel over traditional

“This is an important next step for gas as part of the energy mix,” said Maarten Wetselaar, Integrated Gas and New Energies Director at Shell. “We are proud to work with SCF Group to make these LNG-fueled Aframax crude oil tankers a reality. This is another marine segment embracing the benefits of LNG fuel, making it clear that LNG will play a key role in helping the shipping industry meet new emissions regulations.”

“SCF Group and Shell have an extensive and successful track record of collaboration and technical innovation, and at the heart of our joint aspirations is the shared desire to play a major role in delivering a cleaner and safer maritime environment. This is why SCF Group and Shell decided to pilot this breakthrough initiative to switch the principal fuel of Aframax tankers, the workhorse of the global tanker industry, to LNG,” said Sergey Frank, President & CEO of Sovcomflot.

As part of this agreement, Shell will refuel the vessels from a specialized LNG bunker vessel that will load at the Gas Access to Europe (GATE) terminal in Rotterdam, the Netherlands and a second supply point in the Baltics.