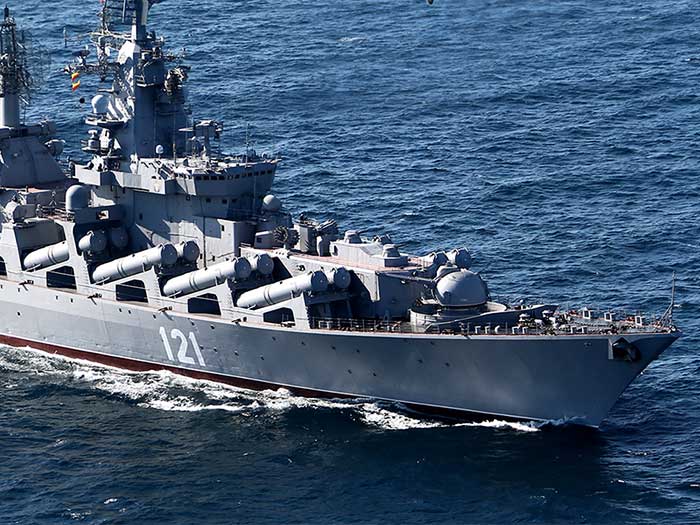 The NGO Human Rights at Sea says that Russian attacks on merchant ships are war crimes. One Russian warship that won’t be taking part in any more such attacks any time soon is the flagship of its Black Sea Fleet, the guided missile cruiser Moskva.

Ukrainian sources say that it was struck yesterday by two Neptun missiles and incurred severe damage.

The Kremlin version of what happened was put out yesterday by the state-controlled TASS news agency.

“The cruiser Moskva of the Black Sea Fleet was seriously damaged as a result of detonation of ammunition that occurred as a result of a fire, the crew was evacuated,” TASS cited the Russian Defense Ministry as saying.

The ministry said the cause of the fire is under investigation.

AFLOAT FOR A WHILE

“The fire on the guided missile cruiser Moskva has been localized. No open flames are seen. The explosions of ammunition have been stopped,” the ministry said, adding that the cruiser has retained buoyancy and its main missile systems are not damaged.

“The crew has been evacuated to other Black Sea Fleet ships in the area,” the ministry said. “Measures are being taken to tug the cruiser to port.”

Subsequently TASS reported the ministry as saying: “During the towing of the Moskva cruiser to the designation port, the ship lost stability due to hull damage, sustained during the detonation of ammunition because of a fire. Amid the heavy storm, the ship sank.”