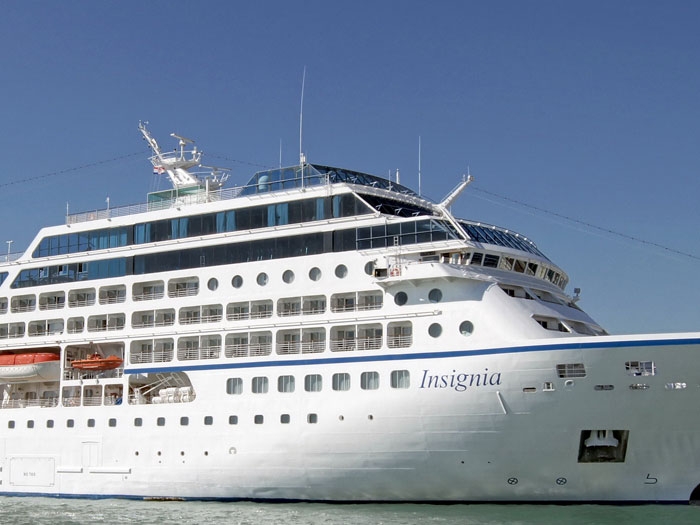 Two contractors and an Insignia crew member died as a result of the fire and another crew member was injured.  The incident is being investigated by the Coast Guard, the National Transportation Safety Board and the vessel’s flag state, the Marshall Islands.

The fire broke out while the ship was docked in St. Lucia during a ten-day voyage that departed San Juan, Puerto Rico on December 7, resulting in the cancellation of the remainder of the sailing.

The vessel has been taken out of service and the company anticipates repair efforts will take approximately nine weeks. The timing of the repairs results in the cancellation of a 24-day voyage which had been scheduled to depart Miami on December 17, 2014 along with the first three legs of Insignia’s Around the World in 180 Days cruise, which was scheduled to depart Miami on January 10, 2015. This modified voyage will now commence on March 22, 2015 and depart from Singapore.

The company says the financial impact on the fourth quarter of 2014 and the first quarter of 2015 is estimated to be a reduction in earnings of approximately $0.05 and $0.05 per share, net of insurance proceeds, respectively. The company reiterates its prior full year 2014 Adjusted EPS guidance of $2.28 to $2.32. The guidance provided excluded the results of the acquisition of Prestige Cruises International, Inc., parent company of Oceania Cruises, which closed in the fourth quarter of 2014 and also excludes the financial impacts from this incident.

“The timing of repairs has unfortunately required the cancellation of Insignia’s holiday voyage along with the modification of the world cruise,” said Kevin Sheehan, president and chief executive officer of Norwegian Cruise Line Holdings Ltd. “We understand how disappointing this news must be to our valued guests and we extend our sincere appreciation for their cooperation and understanding.”

The 592 ft Insignia is an R class cruise ship originally delivered to Renaissance Cruises by shipbuilder Chantiers de l’Atlantique in 1998.