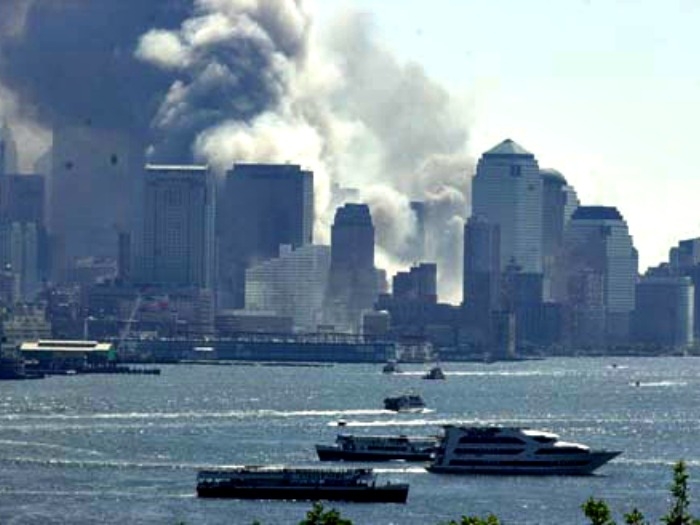 A flotilla of commercial, government and private vessels evacuated more than 500,000 New Yorkers on 9/11

SEPTEMBER 11, 2014—It’s been hard to imagine it’s been 13 years since the September 11 terrorist attacks. For many of us, the wounds are still fresh. It’s a day that touches us to our very core, not only for the painful, overwhelming loss of so many souls, but also for the bravery, valor and sacrifices of untold New Yorkers and first responders in the aftermath of the attacks.

The maritime industry played a major role in the evacuation of more than 500,000 New Yorkers—the Coast Guard originally estimated that there were about 1 million evacuees—that day who had no other way to get home except by ferry, excursion boat, tug and even private recreational boats. Among those hundreds of thousands of New Yorkers, were a few very grateful Marine Log employees. We are still thankful for our maritime heroes.

The following is what we posted on www.marinelog.com just days after the attack.

Marine Log’s 12th floor office windows give us a front row view of our industry at work on the Hudson River. Normally, it’s a peaceful view. But on September 11, it was a window onto the unthinkable as my Marine Log co-workers and I saw the destruction of Twin Towers of the World Trade Center, 20 short blocks to our south. But soon we could see a swarm of vessels—ferries, dinner boats, tugs and small private craft—shuttling thousands of evacuees across the Hudson River from downtown Manhattan to various points of safety in New Jersey. Larger vessels were also on station including a Sandy Hook pilot boat, a Coast Guard cutter and a spill response vessel. The Coast Guard estimated that one million New Yorkers were evacuated from Manhattan by water. The response by vessel operators was nothing short of phenomenal.

Ferries were there in 1989, when the Bay Bridge collapsed in San Francisco, following a devastating earthquake. Ten years later, they were in Ankara, Turkey, when that city was ravaged by a quake. And, now, on September 11, they were joining the rescue effort in New York City. Time and time again, ferries have proved to be a vital component of emergency response.

“We deployed our assets immediately,” says Peter Johansen, senior director of marine operations, New York Waterway, who was conducting crowd control at the ferry terminal at the World Financial Center when the first plane struck. “We just wanted to help those who were trapped downtown.”

Because of their bow-loading design, NY Waterway’s ferries were pressed into service as waterborne ambulances. The vessels were used to medivac injured firefighters across the Hudson to Colgate. In all, NY Waterway ferries carried about 2,000 injured.

“I was at the World Financial Center when Two World Trade Center collapsed,” says Johansen, “and the debris flew right past us. We had to keep moving up the seawall to continue loading people.”

With all of Manhattan’s arteries shut down and its subways at a standstill, NY Waterway put 22 of its 24 ferries in “load and go” service at piers in lower and Midtown Manhattan, taking a total of 158,506 evacuees to points in Jersey City, Hoboken and Weehawken, N.J., as well as Brooklyn and Queens. Among those were eight very weary, but grateful employees of Marine Log’s parent Simmons Boardman Publishing. On a typical day, NY Waterway carries a total of 34,000.

“If there was a lesson to be learned,” says Johansen, “it is that port planners should look at what kind of assets they have in place for emergencies like this.” Johansen plans to address this as a featured speaker at Marine Log’s FERRIES 2001 Conference & Exhibition, November 14-16 in Orlando, FL.

FULL CIRCLE
Also pitching in, were a number of dinner and tour boat operators. “We moved about 30,000 people on our six boats,” says Peter Cavrell, senior vice president of sales and marketing for Circle Line. “It wasn’t any kind of coordinated effort. We just started doing it.” Continues Cavrell, “In its own small way, Circle Line is a symbol of New York. We just wanted to do our part.”

Excursion vessel operator Spirit Cruises began shuttling evacuees from Chelsea Piers across the Hudson River to the Lincoln Harbor Yacht Marina in Weehawken, NJ. Spirit used its three dinner boats, the 625-passenger Spirit of New York, 500-passenger Spirit of New Jersey and 350-passenger Spirit of Hudson. Steve Schwartz, Spirit Cruises’ regional director, says some 8,000 passengers were moved during a 41&Mac218;2 hour period. Schwartz says that even at its peak, when the line stretched from Chelsea Piers to 30th Street, passengers remained orderly and expressed only “words of appreciation and kindness.”

Like many other businesses in New York City, Spirit is facing economic uncertainty in the coming months. “I’m at a loss for what the next six months will hold. Our parent company in France says it could take as long as three years before we get back to normal, if there is such a thing.”

Circle Line’s Cavrell says the company is already talking to the mayor’s office about getting up and running as quickly as possible.

On September 14, the Spirit of New York was given special permission to dock at North Cove Yacht Harbor [at the World Financial Center], where it was used as a floating rest stop to distribute food donated by many of the area’s fine restaurants, including the TriBeCa Grill. It remained on station for 72 hours.

NO OIL, JUST HUMANITY
While there wasn’t any oil to clean up, the Marine Spill Reponse Corporation responded to a general call by the Coast Guard VTS for equipment, personnel and assistance by sending the 210-ft oil spill response vessel New Jersey Responder, stationed in nearby Edison, NJ.

According to Don Toenshoff Jr., MSRC’s executive vice president, on the night of Sept. 11, the Responder was positioned at Battery Park to provide emergency lighting for a helicopter landing area. While there was talk about using the vessel’s 38 ft helicopter landing deck, as well as its large pump capacity and generators to supply water and emergency power for the firemen and rescue workers, Toenshoff says that that never materialized.

“But we were ready to do whatever was needed,” says Toenshoff. “Sometimes, you just have to roll up your sleeves and do what you can to help. We were there to help. It’s not for profit. It’s not for some long-term contract. It’s just absolutely the right thing to do.” The Responder remained on station at North Cove Yacht Harbor for three days to provide a rest area for firefighters, police and volunteers working in the rescue effort.

TUGBOATS RESPOND
According to the American Waterways Operators (AWO), virtually every tugboat company in and around New York committed all of their resources to evacuating disaster victims in response to the Coast Guard’s call. About 35 tugs, stationed at spots designated by the Coast Guard throughout lower Manhattan, aided in the evacuation effort from about 10 a.m. on September 11 to 3 a.m. on September 12.

NEW FERRY SERVICE TO BROOKLYN
With many of the city’s bridges and tunnels still closed to commuter traffic one week after the Trade Center incident, ferry operators responded by adding capacity. The New York City Department of Transportation implemented a new ferry service between the Brooklyn Army Terminal and the Whitehall Street Terminal in lower Manhattan. The service is being handled by the passenger-only Alice Austen Class ferries, which were originally built for weekend service for the Staten Island Ferry. The city had been looking for uses for the 1,200-passenger vessels, which proved to be too small and were unpopular with tourists because they have no outside access.

NY Waterway ratcheted up its daily capacity to handle 250,000 commuters by placing all 24 of its ferries in service and chartering four additional ferries from Fire Island Ferries.