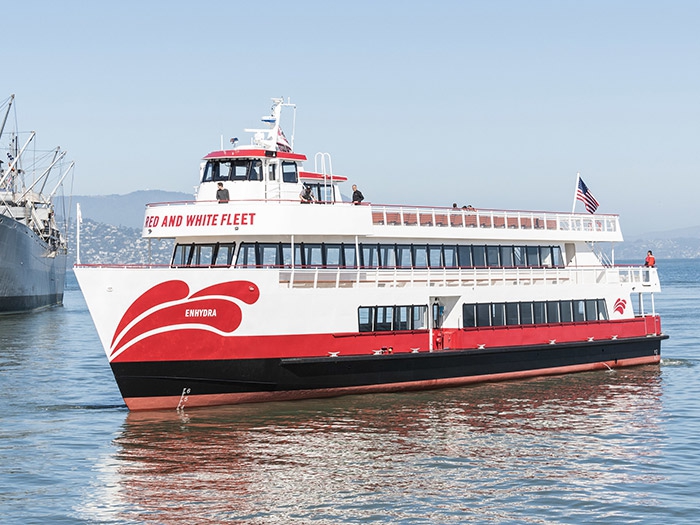 SEPTEMBER 13, 2018 — San Francisco’s Red and White Fleet has taken delivery of its much awaited plug-in hybrid vessel, the Enhydra, from Bellingham, WA, shipbuilder All American Marine.

Thomas C. Escher, President of Red and White Fleet, said: “The Enhydra is another step in transforming our entire fleet to zero pollutions, for the benefit of future generations anywhere in the world.”

As previously reported (see story), Enhydra features a BAE Systems HybriGen propulsion system that includes large lithium ion battery packs (160 kWh total), generator, control system, and AC electric traction motors. The generator is mounted to a variable speed Cummins QSL9 410 hp diesel engine. The system offers parallel hybrid powering of the AC traction motor from the generator, the batteries or both. The motor is coupled to the propulsion shaft via a reduction gear for thrust and increased propeller efficiency.

Guests on board Enhydra will experience views of the Bay and San Francisco skyline from each of the three decks, complete with the latest in hospitality services and audio tour entertainment. The second level offers a full wrap-around viewing platform with access to the large bow foredeck. The top deck is fully open and offers plenty of comfortable seating, an unbeatable vantage point for viewing air and firework shows.

Joe Burgard, VP at Red and White Fleet, said: “The Enhydra is going to change the way people experience San Francisco bay with its sleek aesthetics and quiet hybrid drive, and we see it not only as the first step in moving our fleet to zero emission but also leading our industry to a cleaner future.”

The Enhydra was launched on August 13 and arrived in San Francisco on September 5. The vessel will be open to the public for the first time today, September 13.

[…] Vessel,” something he is particularly well placed to address as Red & White Fleet is the operator of the first plug-in hybrid passenger vessel to be built in the U.S., the 600 passenger Enhydra, delivered by All American Marine, Bellingham, Wash., last […]