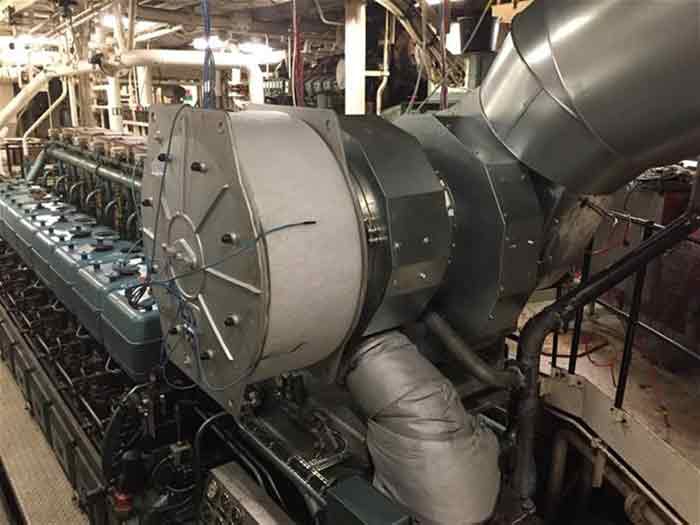 DECEMBER 9, 2016 — A 1985-built North Sea trawler has been given a new lease of life, thanks to a turbocharger retrofit carried out by MAN Diesel & Turbo in just five weeks from first enquiry to turbocharger commissioning.

The Faeroese trawler Sjurdaberg has operated in the North Sea for over 30 years. Equipped with a 1984-built MAN 9L28/32A Alpha engine and NA34/K turbocharger, the trawler has accumulated more than 115,000 operating hours in one of the world’s major fishing grounds.

For trawlers, powerful engines and turbochargers are a prerequisite for competing in the highly competitive, global fishing industry.

When a large-scale overhaul of the Sjurdaberg’s engine became necessary, it transpired that a turbocharger retrofit would be a convincing, long-term solution for this particular vessel.

“During the retrofit, we replaced the original axial MAN NA34/K unit that had served so well with a modern, radial MAN TCR20 turbocharger,” says Gottfried Eberle, Head of Turbocharger Retrofit – MAN Diesel & Turbo. “The main advantages of the new turbocharger are its small size and efficiency, and its short reaction time in the event of load changes. The Sjurdaberg has really gotten a new lease of life!”

The work was carried out in Denmark by MAN Diesel & Turbo, Frederikshavn, in close cooperation with Turbocharger Retrofit in Augsburg, who report that the modification from axial to radial was particularly challenging due to the necessary adaptations of the fundament and installation of new intermediate pieces and pipes. Additionally, the exhaust-gas pipe had to be fitted to the new turbocharger.

All of the assembly pieces were manufactured on-site in Frederikshavn in a very short time with the retrofit itself realised in a mere 10 days.

The bollard-pull test, during which the vessel is moored to the pier and operated on full load which is simultaneously measured, delivered convincing results. The trawler owner was highly satisfied with the retrofit and the subsequent benefits from increased performance and reliability, high spare-parts availability, containment safety and reduced maintenance costs.

The Sjurdaberg pictured at berth in Frederikshavn, Denmark, during its overhaul