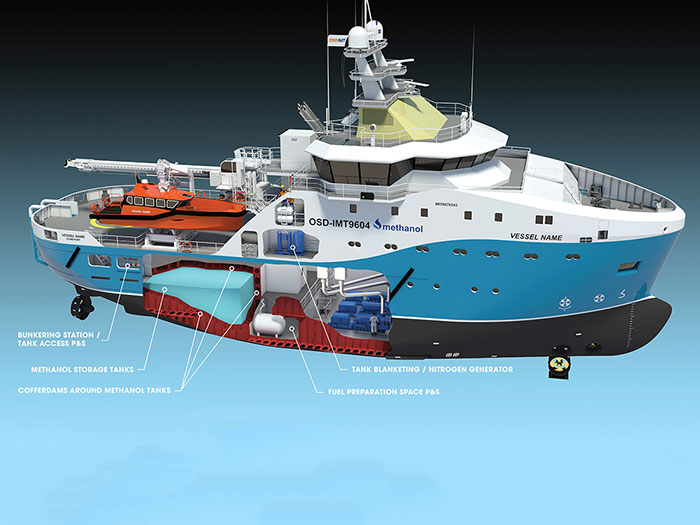 It is equipped with a Z-bridge Bring-2-Work system, which can work both as a technicians transfer system and as a motion compensated crane. For light weather conditions, a daughter craft can be used to transfer up to two wind farm service crews.

OSD-IMT says that, with accommodation space for up to 24 technicians, a covered storage area for spare parts and a battery hybrid power generation system driving the propulsion system, the vessel is a full-fledged DP2 SOV.

OSD-IMT is developing a methanol fueled version of the OSD-IMT9604 in close cooperation with the research department of Damen Shipyards.

OSD-IMT says that methanol produced from renewable sources is a so called e-fuel canl reduces the environmental footprint, especially the greenhouse gas emissions, of a vessel considerably (50% to 90%, subject to the feedstock of the fuel). In combination with the relatively high energy density it makes for an attractive use as a fuel on ships, creating a lower emission profile while maintaining a good range and endurance.

However, the application of methanol does impact the design of the vessel. Considered a low-flashpoint fuel, it poses special requirements for a number of arrangements on board. Tanks must be fitted with cofferdams, spaces and ventilation associated with the methanol system must be designed to prevent exposure to ignition sources or even physical contact.

In the OSD-IMT development of the methanol fueled mini-SOV, these considerations have been taken into account. The design is now being further developed to come to an AiP for the methanol system. Anticipating increased availability of methanol burning internal combustion engines, OSD-IMT says, “we feel this design is the right way forward.”