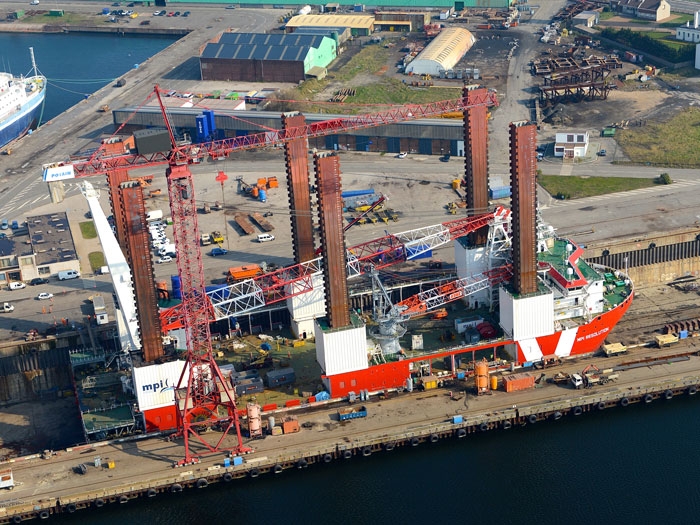 The shipyard has carried out upgrades on the spudcans of all six of the jack-up vessel’s legs to give them the additional strength they need to withstand the huge loads to which they are subjected when spudding on rocky seabeds.

The operation, which is thought to be the first of kind, involved strengthening the spudcans using the Sandwich Plate System (SPS) developed by Intelligent Engineering (UK) Ltd.

Damen ARNO Dunkerque carried out the steel work in collaboration with Intelligent Engineering in an operation which was carried out in conjunction with the vessel’s 10-year survey and drydocking, as well as extensive refitting operations. The whole operation was completed within a month, allowing the vessel to leave Dunkirk on April 3, a day ahead of its scheduled delivery date, despite its having arrived at the French port two weeks later than expected.

Damen ARNO Dunkerque managing director Bob Derks said that the yard worked 24 hours a day and seven days a week to ensure that the work was completed on time. With outside personnel, the yard’s 165-strong permanent workforce was doubled.

Intelligent Engineering SPS shipbuilding director Martin Brooking said that the use of SPS had turned what would have been a much longer and complex operation into one that could be carried out during the MPI Resolution’s scheduled drydocking.

This would not have been possible had the existing steel plate been replaced with 100 mm steel plate, which would have involved much more time and work.

“We were able to maximize the available resources of the shipyard because we were using 40 mm plate and we created this composite sandwich using the polyurethane core,” said Mr. Brooking. “Basically, what we bring to the design in that way is that we essentially make a new composite plate which is 120 mm thick.”

This solution also allowed the vessel’s operator, MPI Offshore, part of the Netherlands’ Vroon shipping group, to strengthen the spudcans without exceeding the 25 tonne per leg additional weight limit it had set itself for the work.

MPI Offshore fleet manager Dave Galloway said that the upgrade of the spudcans had become necessary to enable the MPI Resolution to work on the Humber Gateway wind farm project currently under construction off the east coast of England.

“The Intelligent Engineering upgrade gives a significant increase to the load-bearing capacity of the spudcan without too much increase in weight,” he said.

It was designated by the group as the yard best suited to carry out the MPI Resolution contract.

“It shows what Damen as a group can bring to this location,” said Bob Derks, adding that he expected that the contract would lead to others of the same type on an expanding market for offshore wind turbine installation. “This is a reference project for us,” he said. “It is a market which is growing now, given the age of the vessels operating in installing the wind farms.”