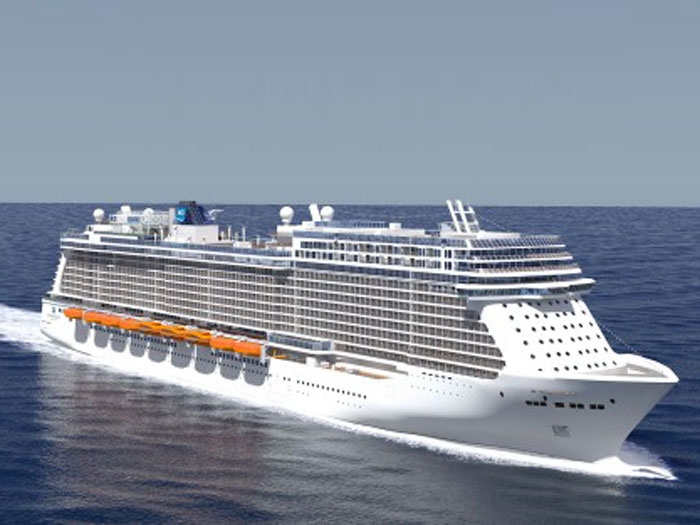 The 4,200 passenger Norwegian Bliss is the second cruise ship in the Norwegian's Breakaway Plus class

MARCH 10, 2015 — London headquartered Silverstream Technologies reports that the first commercial installation of its Silverstream hull air lubrication system will be on the Norwegian Cruise Line newbuild Norwegian Bliss, scheduled for delivery in Spring 2017 from shipbuilder Meyer Werft in Germany.

There is an option for two further Norwegian Cruise Line vessels to be fitted with the system.

The Silverstream System produces a thin layer of micro bubbles that creates a single ‘air carpet’ along the hull of the vessel. This reduces the frictional resistance between the water and hull and improves the vessel’s operational efficiency, reducing fuel consumption and associated emissions. The technology can be added to a newbuild design, or retrofitted to an existing ship within 14 days.

As we reported last month, a recent retrofit installation on an existing product tanker produced verified fuel savings of up to 4.3% in sea trials on a 40,000 dwt products tanker in sea trials funded by Shell (see earlier story).

“Despite the recent decline in fuel prices, new sulphur regulations in Emission Control Areas still mean significantly increased fuel bills for the cruise industry,” said Christer Karlsson, Senior Vice President, Newbuild, Norwegian Cruise Line. “In conjunction with the importance of constantly improving sustainability, it is therefore critical that we look at viable opportunities that improve operational and environmental efficiencies, driving down fuel bills and reducing emissions. The Silverstream System is an example of such a clean technology that can genuinely make a difference.”

“It is a landmark moment for the company to secure a significant order from a leading cruise operator, which will be installed and delivered by one of the world’s most respected shipyards for technology and innovation,” said Silverstream CEO Noah Silberschmidt. “Not only does this highlight the Silverstream System and air lubrication as an applied and sustainable clean technology, it also demonstrates the industry’s culture and desire to improve their operational and environmental efficiencies as a means of reducing emissions, fuel costs, and improving the sustainability of their operations.”