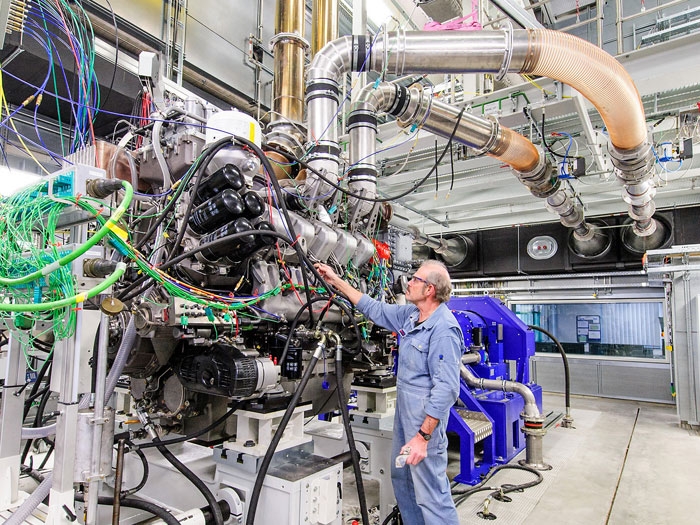 JULY 27, 2015 — Rolls-Royce Power Systems is investing in the development of next-generation combustion engines at its MTU brand.

“This move is making space for new developments in every sense of the word. Technology on the combustion engine of the future is going to be even more complex than that of its predecessors, so we have to make absolutely sure that we have the capacity to carry out tests and trials on our new products reliably and intensively,” says Dr. Ulrich Dohle, CEO of Rolls-Royce Power Systems, which has invested some EUR 40 million in the new testing facilities,

New combustion processes, advanced technologies for electronic regulation and control and, from mid-2016, alternative fuels such as gas are among the latest developments that will be put under scrutiny at the test stands.

A special feature of the new testing facility is the gallery that has been erected above each test stand booth. This will play a role in the development of exhaust after treatment systems that will enable engines to meet the strict emissions standards coming into force in the future.

“Exhaust after treatment is one of our technologies for MTU engines. We are making a major research effort in this area because we want to develop diesel particulate filter and SCR technologies as far as we can ourselves,” says Dr. Dohle. “That will put us in a position to provide customers with a complete systems package.”

Today’s ultra-modern test stands are a prerequisite for tomorrow’s cutting-edge technologies. Chilling machines, heat exchangers, steam generators and various fuel formulations allow a whole spectrum of engine operation scenarios to be simulated – from biting cold to tropical humidity. State-of-the-art measuring and analysis systems support test stand technicians and development engineers in their work by enabling them to monitor results and replicate and document them precisely.

Sophisticated technologies also come into play in the way the test stands themselves are run. In addition to conventional dynamometers, electrical gensets will also be used to simulate rapid load changes. The electrical power they deliver will also be fed into the factory’s own power grid.

Construction of the five floor, 9,000 square-meter building that houses the test stands was begun in spring 2013 and recently completed.The first three test stands for testing 2,500-kW engines were set up in the first phase. Now underway is construction of a gas supply network for gas engine research that is to go into service in mid-2016. Further test stands can also be installed according to requirements.