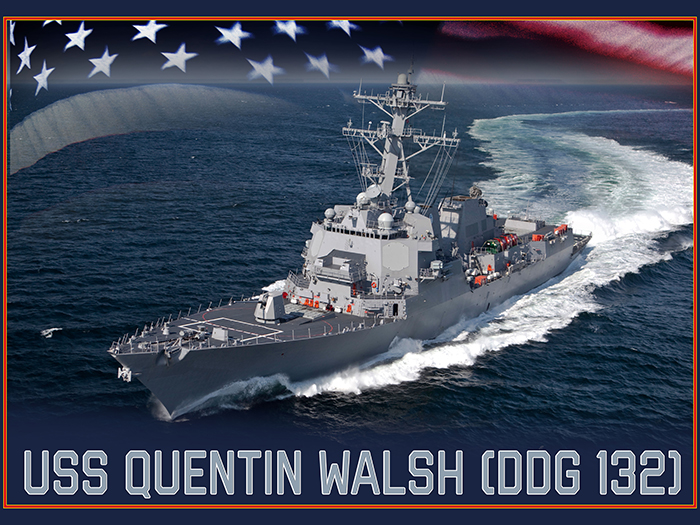 Secretary of the U.S. Navy Richard V. Spencer has announced that a future Arleigh Burke-class guided-missile destroyer, DDG 132, is to be named in honor of U.S.Coast Guard Capt. Quentin Walsh, who was awarded the Navy Cross for his service during World War II.

“Capt. Walsh was a hero whose efforts during World War II continue to inspire, and his leadership in securing the French port of Cherbourg had a profound effect on the success of the amphibious operations associated with Operation Overlord,” Spencer said.

“For over two centuries, the Navy and Marine Corps team and the Coast Guard have sailed side by side, in peacetime and war, fair weather or foul. I am honored the future USS Quentin Walsh will carry Capt. Walsh’s legacy of strength and service throughout the world, and I am proud that for decades to come, this ship will remind friends and adversaries alike of the proud history of our services and the skill and professionalism of all those who stand the watch today.”

During World War II, while serving on the staff of the Commander, U.S. Naval Forces, Europe, then Cmdr. Walsh was given command of a 53-man special task force assigned to capture the vital port of Cherbourg. Despite heavy casualties, his small force seized the port facilities and took control of the harbor the day after they entered the city.

After he discovered that the remaining German garrison at Fort du Homet held 52 U.S. Army paratroopers as prisoners, Walsh, under a flag of truce, exaggerated the strength of the forces under his command and persuaded the commanding officer of the remnants of the German garrison to surrender. These actions earned him the Navy Cross and, all told, he accepted the surrender of over 700 German soldiers. Walsh died May 18, 2000.

“We are grateful to the U.S. Navy and Sec. Spencer for honoring one of our Coast Guard heroes, Capt. Quentin Walsh,” Schultz said. “Naming a future Navy destroyer after Capt. Walsh, the first Arleigh Burke-class ship to be named after a Coast Guard legend, highlights not only his courageous actions but the bravery of all U.S. service members involved in the D-Day Invasion of Normandy.

“The U.S. Navy and Coast Guard legacies are interwoven as reflected in the heroic actions of Capt. Walsh and the Navy Sailors under his command during the liberation of Cherbourg,” the commandant continued. “We will remain always ready to stand with our brothers and sisters in the U.S. Navy and Marine Corps.”

Arleigh Burke-class destroyers conduct a variety of operations, from peacetime presence and crisis response to sea control and power projection. The future USS Quentin Walsh (DDG 132) will be capable of fighting air, surface and subsurface battles simultaneously and will contain a combination of offensive and defensive weapon systems to support maritime warfare, including integrated air and missile defense and vertical launch capabilities.

USS Quentin Walsh will be constructed at Bath Iron Works, a division of General Dynamics in Bath, Maine. The ship will be 509 feet long, have a beam of 59 feet and be capable of operating in excess of 30 knots.