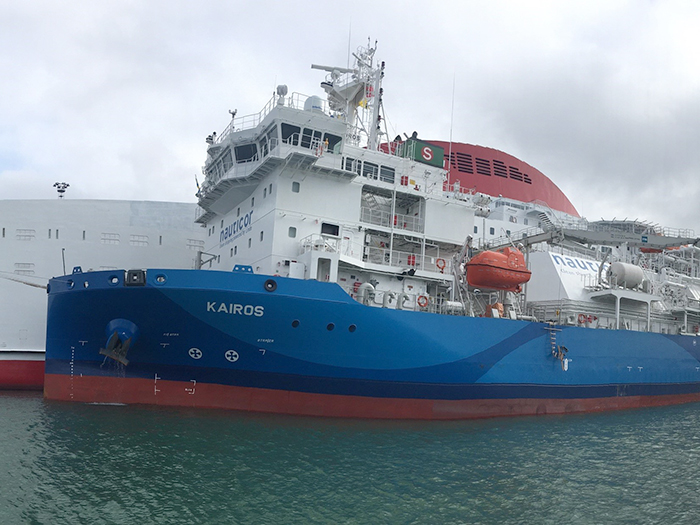 Hamburg based Linde Group subsidiary Nauticor is to become the sole charterer of the world’s largest LNG bunkering vessel, the 7,500 cu.m Kairos.

The vessel is on charter from owner Babcock Schulte Energy to Blue LNG, a joint venture between Nauticor, with a 90% stake, and Lithuanian energy infrastructure provider Klaipedos Nafta (KN).

The deal will allow both parties to optimize their core operations.

Nauticor uses Kairos to supply marine customers with LNG as a fuel and the demand for Kairos’ LNG bunkering service is growing.

Currently, Kairos is also used for the reloading of LNG from the Klaipėda import terminal to the LNG reloading station situated next to the gates of the port of Klaipėda. This operation requires Kairos to call the port of Klaipéda on a regular basis.

“By having 100% control over Kairos, we can deploy the vessel at the LNG bunkering ‘hotspots’ without having the obligation to deviate to Klaipeda on a regular basis,” says Mahinde Abeynaike, CEO of Nauticor. “Hence we will be able to fully focus on our customers’ scheduling requirements. We are looking forward to working closely with KN also in the future to further strengthen the Baltic Sea LNG small scale supply infrastructure.”

Mindaugas Jusius, CEO of KN, says, “Several years ago when the agreement on partnership to charter the vessel Kairos was concluded, there was a lack of LNG transportation services in the market. Therefore, we decided to become charterers of one of such vessels. At that time, it was the only possibility for KN to assure the full LNG supply chain for its customers. There have been new possibilities for LNG transportation emerging in the region recently.”