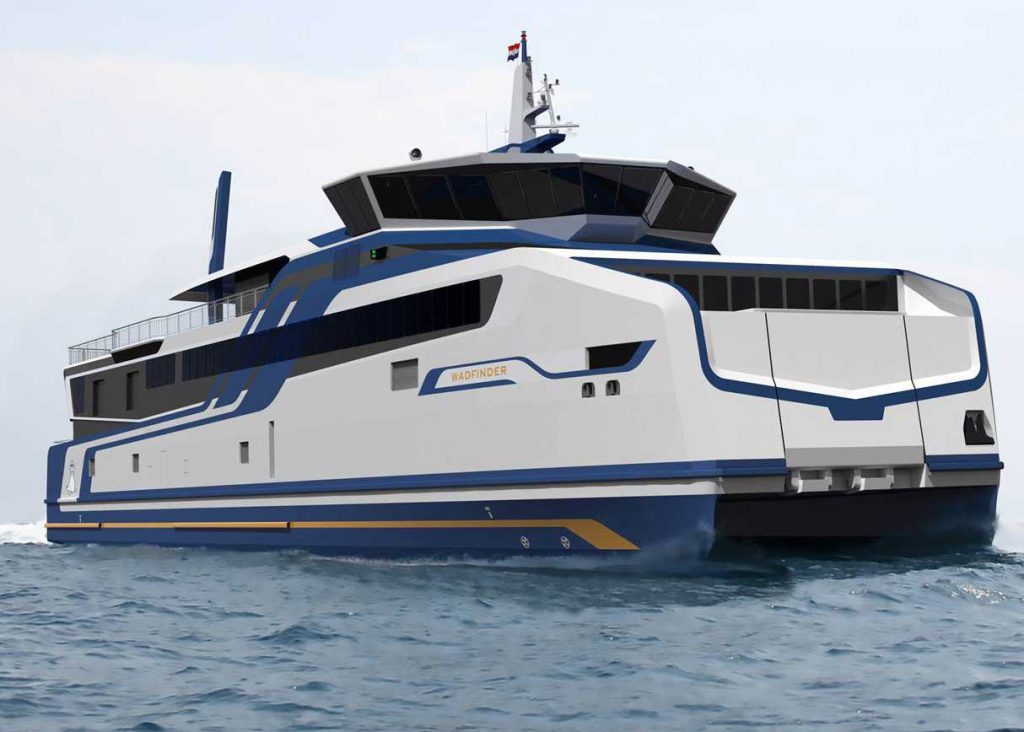 Designed by BMT Nigel Gee, with the interior design by Vripack, the two aluminum catamarans are to operate in the ecologically sensitive Wadden Sea providing ferry services for as many as 66 vehicles and 599 passengers between the Dutch mainland and the islands of Terschelling and Vlieland, from 2018.

Being built by Strategic Marine’s Vietnam shipyard, each ferry will be fitted with two MTU 16-cylinder pre-production Series 4000 gas engines, each delivering around 1,500 kW, as the main propulsion system. The IMO Tier III compliant engines will deliver power to azimuth fixed pitch propellers, giving the ferries an operational speed of 14 knots.

“Particularly on the sensitive Wadden Sea that has been declared worthy of protection, it is very important for us that ships are operated in an extremely environmentally friendly manner,” said Richard de Vries, Head of Operations at Doeksen. He added that this, and the the engines dynamic acceleration behavior made the MTU engines ” the right choice for us.”

Knut Müller, Head of the Marine and Government Business Division at MTU, said at the signing of the contract: “We would like to express our thanks to our long-standing partners Strategic Marine and Doeksen for the trust they have placed in our new technologies and are delighted that the MTU gas engine has been so well received by the market.”

In addition to the Doeksen ferries, MTU gas engines will be used to power a new harbor tug being built by Damen for the shipping company Svitzer and a new ferry on Lake Constance operated by the local utility, Stadtwerke Konstanz.

Mark Newbold, chairman of Strategic Marine, commented: “This is a milestone project for us. We see an ever increasing focus on the environmental aspects of marine transportation, with LNG emerging as the fuel of choice for many operators and we are committed to being at the forefront of developing LNG and other emission reducing technologies further to the benefit of our customers and the environment. We have been working with MTU now successfully for over 15 years in providing engines for patrol boats, windfarm supply vessels and ferries.”