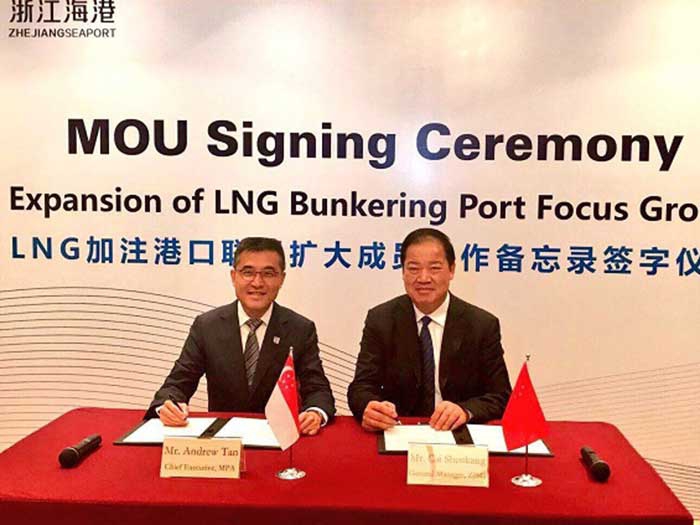 Mr Andrew Tan, Chief Executive of MPA, and Mr Cai Shenkang, General Manager and Vice-Chairman of Zhejiang Provincial Seaport Group, formalized the inclusion of Ningbo-Zhoushan port as a member of the LNG port focus group at a signing ceremony yesterday

JULY 11, 2017 — The Maritime and Port Authority of Singapore (MPA) reports that three more ports have joined a focus group aimed at strengthening the network of Liquefied Natural Gas (LNG) bunker-ready ports and to bolstering efforts to enable the uptake of LNG as a marine fuel.

The latest ports to join are the Port of Ningbo-Zhoushan, Port of Marseille Fos, and Port of Vancouver.

The inclusion of Port of Ningbo-Zhoushan was formalized yesterday at a signing ceremony on the sidelines of the third Port Authorities’ Roundtable (PAR) organized by the Ningbo Municipal Port Administration Bureau.

The focus group now comprises a total of eleven ports and maritime administrations across Asia, Europe and North America. It was first formed in 2014 by Maritime and Port Authority of Singapore (MPA), Antwerp Port Authority, Port of Rotterdam and Port of Zeebrugge.