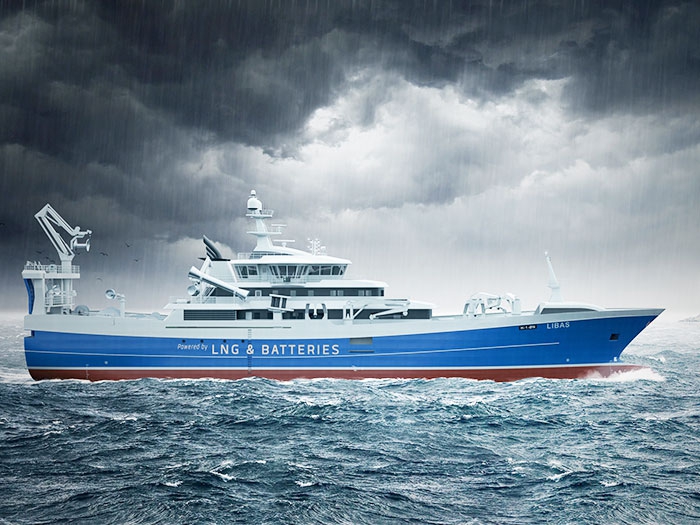 MAY 24, 2018 — A trawler on order at Cemre Shipyard, Turkey, for Norway’s Liegruppen AS, will be the world’s first fishing vessel with LNG fueled propulsion and will also feature a large battery pack.

Named Libas, the 86 m purse-seiner has been designed by Salt Ship Design.

Wayne Jones, Chief Sales Officer with MAN Diesel & Turbo, said: “This is a pioneering project. At MAN we are convinced that low-emission gas fuels are the silver bullet to decarbonising the shipping industry and we have made it our mission to guide our customers through that transition.”

Lex Nijsen, Head of Four-Stroke Marine, MAN Diesel & Turbo said: “This is a very noteworthy win. Our ability to provide this efficient, low-emission, proven LNG-fueled propulsion package – a world’s first for this environmentally sensitive segment – really puts our credentials as a system provider on display.”

“We offer a full system approach with regards to gas propulsion,” Nijsen added “This includes newbuilds as much as retrofits of existing vessels. In 2017 MAN has retrofitted the world’s first container vessel to LNG and more projects are being realized as we speak.”

The system is designed for a net tank volume of 330 cu.m of LNG and temperatures down to minus 163 °C. The tank stores LNG at the lowest possible temperature and pressure until it is evaporated and supplied to the dual-fuel MAN 6L51/60DF main engine, as consumption demands.

MAN Diesel & Turbo’s uprated MAN L51/60DF engine successfully passed its Type Approval Test at the end of 2017 where a nine-cylinder test engine had an output of 1,150 kW/cylinder at a nominal speed of 500/514 rpm. The engine can be employed both as marine main-engine and auxiliary engine and ran on both fuel-oil (DMA) and natural gas on the testbed