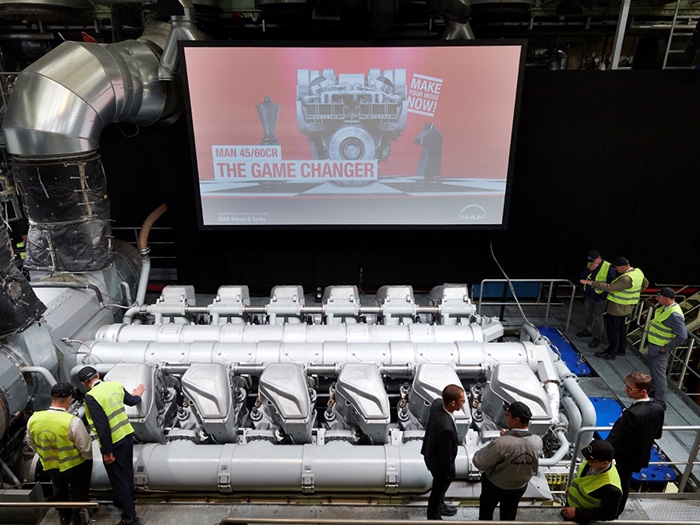 On December 6, MAN Diesel & Turbo signed a Framework Agreement for Technical Cooperation with the China Classification Society (CCS). The agreement provides for the strengthening of the cooperation between the twosignatories in the fields of ship design, ship-type research & development, ship power, ship automation, environmental protection, intelligent ship and battery solutions.

Ang said: “This agreement represents a new start in our collaboration with CCS, one which I am certain will bring us more opportunities and successes. China is one of the most important markets for us already, accounting for more than 12% of our total revenue. And we see great growth opportunities here and want to deepen our partnership with the Chinese economy”.

“CCS and MAN had a very good cooperation in the past years. And we believe the Agreement will help us to explore and carry out collaboration within the areas of common advantages,”said Sun Feng.

The agreement is a renewal agreement under the Framework Agreement for Technical Cooperation signed by both parties back in 2013. MAN Diesel & Turbo and CCS have since strengthened their cooperation within the above-mentioned fields.

Under the agreement, XINYA will build a 560 sq.m service workshop within its facilities in Zhoushan, expecting to be finished next August. MAN PrimeServ will provide service for diesel engines, propellers and turbochargers in the new service workshop.

“As MAN’s service brand, MAN PrimeServ is determined to become a preferred service provider,” said Jefrey Ang at the signing ceremony. “With the establishment of the new service spot, we are closer to the customers, thus being able to provide more efficient and prompt service to the ship owners.”

“We have confidence in MAN products and services. And we really look forward to our collaboration in the future with the new service workshop”, said Zhou Boting, Vice General Manager – XINYA

On the exhibit floor, MAN Diesel & Turbo used Marintec China to showcase models of the company’s new 45/60CR and ME-LGI engines, as well as its innovative HP-SCR emissions reduction technology.

MAN recently revealed the successor to its 48/60CR engine in the company’s 4x line of high-performance diesel engines. The MAN 45/60CR marine diesel engine will initially be available as 12V and 14V versions that boast power outputs, of 15,600 kW and 18,200 kW respectively, with inline versions following at a later stage.

Wayne Jones, Chief Sales Officer of MAN Diesel & Turbo, said: “The new engine combines the best features of the current 48/60CR, such as MAN’s common-rail system with ECOMAP capability, and adds new technologies such as two-stage turbocharging for an unrivaled Specific Fuel Oil Consumption. The resultant reduction in operating expenses and positive environmental impact are sure to attract strong market interest.”

MAN Diesel & Turbo also used Marintec China as an opportunity to draw further attention to its new high-pressure Selective Catalytic Reduction system. MAN SCR-HP is available for two-stroke engines of all bore sizes and reduces – through internal catalytic reaction – NOx exhaust emissions to IMO Tier III limits. With specially developed honeycombs and honeycomb materials, as well as an integrated mixing unit, the overall size of the reactor has been drastically reduced compared to typical market designs and its medium-speed counterpart. Delivery is first expected from the beginning of 2018.

Bjarne Foldager, Vice President MAN Diesel & Turbo and Head of Sales & Promotion Two-Stroke Business, said: “The development of our new SCR is an important step on the path to a more sustainable future of shipping and global trade. At the same time it offers additional choices to ship owners worldwide, who can now choose from all NOx reduction technologies and select the optimal solution for their MAN Diesel & Turbo two-stroke engines.”