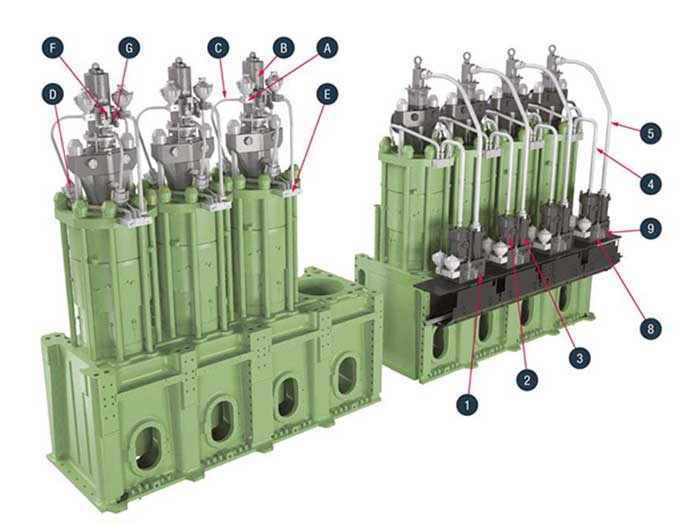 The engines are weight-optimized, compared to their MK 9 counterparts, and form the new design platform for a new Mk 10 engine portfolio. Key to the new platform is the development of the TCEV (Top Controlled Exhaust Valve) and FBIV (Fuel Booster Injection Valve) components.

“For some years now, our primary R&D target has been to develop the next generation of our ME platform,” says Ole Grøne, Senior ‎Vice President Sales and Promotion – MAN Diesel & Turbo. “During this time, the goal has been to utilize the full potential of the ME engine concept by reducing the complexity of the hydraulic system and increase system performance; the new TCEV and FBIV technologies have been developed within this scope.”

The first engines in a new generation that ultimately will involve the upgrading of all S- and G-engines to the Mk 10 platform are:

The design initiative delivers a specific weight reduction of up to 10% per kW, and also accommodates a higher Pmax, which also contributes to a reduction in fuel consumption.

“We are confident that the market will embrace the benefits of the new platform as it represents a simpler design with fewer components, a reduced total weight, and a reduced fuel consumption,” says Mr. Grøne. “It is an improvement not only for shipowners, but also for our licensees.”

The Mk 10 platform is based on a much more mass-optimized design platform that results in lighter engines with reduced overall length, width and height compared to its Mk 9 counterpart.

MAN Diesel & Turbo reports that the TCEV/FBIV system is entering the final confirmation stage and has already operated in service for more than 2,000 hours as a system, and the FBIVs separately for more than 10,000 hours – both on a 50-cm bore engine.