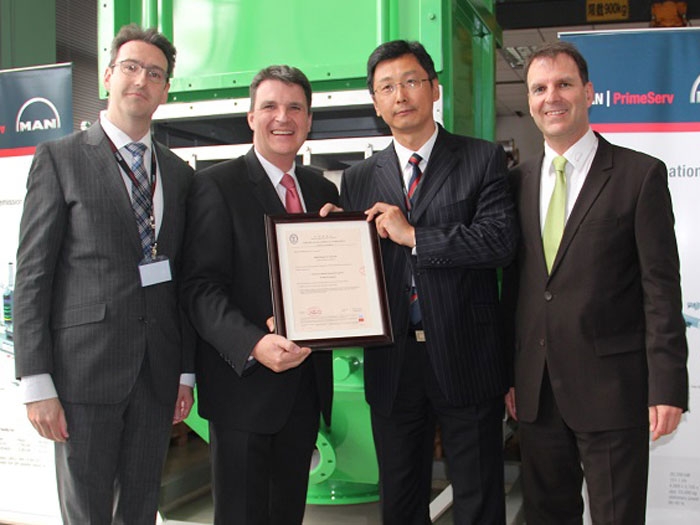 Testing took place on an MAN 8L21/31 auxiliary engine with an integrated SCR system but the certificate applies to the entire medium-speed engine portfolio.

The MAN-built engine is bound for a DFDS Seaways Ro-Ro vessel, the Petunia Seaways. The ceremony was attended by major shipowner companies and licensees.

“This certificate represents an important milestone in our collaboration with CCS and is of utmost importance in providing a complete IMO Tier III package solution to our customers,” said Dr. Daniel Struckmeier – Head of Emission 2016 – Senior Project Manager, MAN Diesel & Turbo. “This milestone is one of three agreed major steps in a long-term relationship with CCS. The first step has been accomplished after issuance of the first IMO Tier III EIAPP certificate for the 21/31 engine group in February this year. Today’s award finalized the second step, which includes the certification of the MAN Diesel & Turbo-SCR modeling tool, covering the MAN Diesel & Turbo engine portfolio from 5L16/24 to 18V48/60. From today on, every customer can profit from the easy and effective way of IMO TIER III certification for all MDT four-stroke engines. The final step, planned for autumn of this year, will incorporate the issuance of a general approval of our entire engine portfolio based on the afore-mentioned MAN Diesel & Turbo SCR modeling tool.”

In December 2013, MAN Diesel & Turbo signed a Framework Agreement with CCS for Technical Cooperation. Both parties have since strengthened their cooperation in the fields of ship technology, ship-type research & development and market cooperation.

“We are glad to present the first Tier III Certificate to MAN. Based on the good cooperation, we can provide a better service for the marine and shipbuilding industry,” said Sun Feng after the ceremony.

“China is MAN Diesel & Turbo’s most important market,” said Goetz Kassing, Chairman and Head of MAN Diesel & Turbo, Region China. “As China has taken the next steps to higher levels of efficient and clean energy production for a sustainable and better environment, it is our priority to align our engines with the new policies to stay ahead of the competition.”