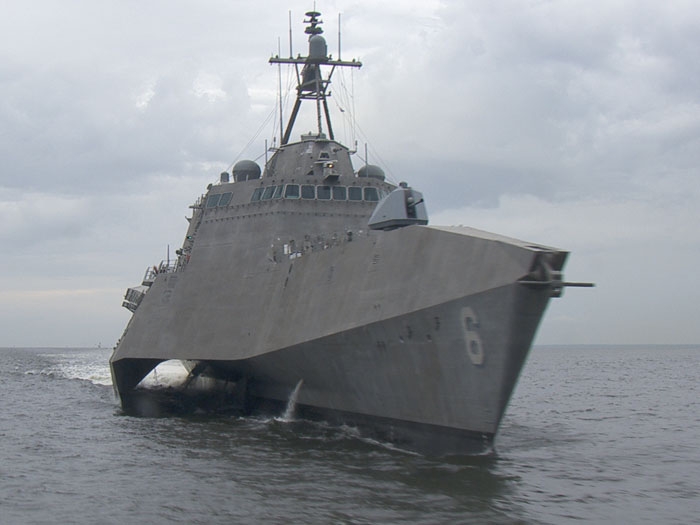 AUGUST 20, 2015 — Secretary of the Navy Ray Mabus announced Aug. 19 that the next Independence variant Littoral Combat Ship will be named USS Oakland (LCS 24).

According to a Congressional Research Service (CRS) report published in June, LCS 24, which will be built at Austal USA’s Mobile, AL, shipyard, will be the first of the three LCSs that the Navy expects to request for procurement in FY 2016 and the final ship to be procured under the Navy’s current 10-ship each block purchase with the two LCS shipbuilders. It also looks likely to be the last ship built purely as an LCS. The CRS says the Navy wants to build ships 25 through 32 with at least some of the enhancements planned for ships 33 to 52, which will be designated as frigates.

The future USS Oakland will be named to honor the long-standing history its namesake city in California has had with the Navy. It will be 419 feet long and be capable of operating at speeds in excess of 40 knots.The future USS Oakland will be the third naval ship to bear the name. The first, commissioned in 1918, was largely used to transport cargo; the second, commissioned in 1942 during the height of World War II, was only in service for seven years, but was key in many antiaircraft missions in places such as Pearl Harbor, Marshall Islands, Pagan, Guam, Iwo Jima, Rota, Peleliu and Okinawa. After the war, Oakland performed two duty patrols off the coast of China before being decommissioned.

A fast, agile surface combatant, the LCS provides the required war fighting capabilities and operational flexibility to execute a variety of missions in areas such as mine warfare, anti-submarine warfare and surface warfare.

The ship will be built with modular design incorporating mission packages that can be changed out quickly as combat needs change in a region. These mission packages are supported by detachments that deploy both manned and unmanned vehicles, and sensors, in support of mine, undersea, and surface warfare missions.