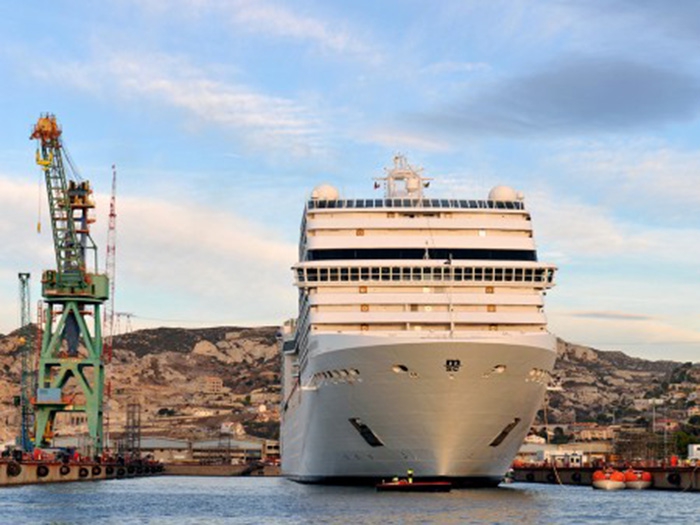 Opened in 1975 to accommodate a new generation of ULCCs, the giant dock measures 485 m (1.525 ft) long by 85 m (279 ft) wide with a 10.7m (35 ft) maximum draft above the blocks. Hit by a downturn in the movements of large oil tankers and growing competition from Asian shipyards, activity at the dock gradually slowed until it was being used only as a floating berth.

Now, the emergence of new breeds of mega cruise ships and giant containerships has created a new market for the facility.

Operated under a long-term exclusive concession from the port by a subsidiary of ship repairer Chantier Naval de Marseille (CNdM), the dock has undergone a revamp that has included construction of a new floating concrete gate (with an opening width of 85 m), overhaul of the pumping system and repair of the lifting facilities (including a 150 tons capacity crane on rails).

Operations in the reopened dock got underway this week with maintenance work scheduled for an MSC cruise ship that will be followed by two Costa Crociere ships at the end of November and beginning of December.

Costa has held a 33.3% stake in CNdM since August last year.

CNdM says that its activities will include a special focus on operations linked to the optimization of energy efficiency and environmental performances of cruise ships.

“It is a great satisfaction for our company to see Forme 10 finally fully operational as we have always believed in the great potential of this facility,” says Ferdinando Garrè, CEO of San Giorgio del Porto, the Genoa, Italy, headquartered parent company of CNdM. “The availability of Forme 10 marks a turning point in the operations of Chantier Naval de Marseille, which now has all it takes to become the point of reference in the Mediterranean area for ship repair, maintenance and conversion.”

“The port of Marseille Fos is the first French cruise port and plays a major role in the Mediterranean Sea. The size of the new ships requires dry docks of adequate measurements and in the proximity of their area of operation. Dry dock no. 10 responds to this need and opens new industrial perspectives to large scale ship repair, offering new opportunities for the offshore sector, gas tankers, bulk carriers or containerships,” says Christine Cabau Woehrel, CEO of Marseille Fos Port Authority. “It is a new page for ship repair in Marseille.”