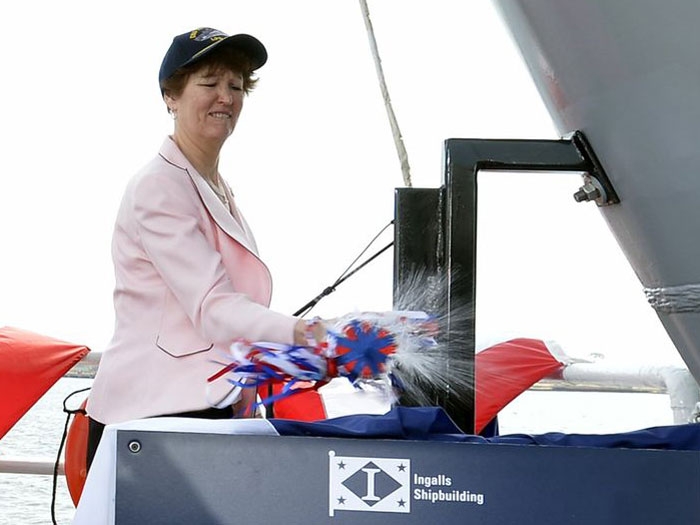 A former Marine Corps officer, he was the first Vietnam War veteran elected to the U.S. House of Representatives.

“Jack Murtha poured everything—everything he was, everything he had—into the service of our country and the lives of the American people,” said the featured speaker at the christening, House Democratic Leader Nancy Pelosi, D-Calif. “To watch Chairman Murtha legislate was to see a master at work, but more indicative of his character was to watch him communicate with our men and women in uniform, whether on the battlefield or at their bedside. He knew how serious a responsibility it is to send our men and women into harm’s way, and he was unwavering in his conviction that we must honor their sacrifice not only with our words but our deeds.

“Like its namesake, the John P. Murtha will provide our servicemen and women the means to enter the battle and to make their way back home,” she continued. “Congratulations to Ingalls Shipbuilding and all of the hard-working men and women who have put their skill and determination into this ship and this special day.”

Murtha’s daughter, Donna S. Murtha, is the ship sponsor. At the culmination of the ceremony, she smashed a bottle of sparkling wine across the bow of the ship, officially christening LPD 26 as the John P. Murtha. “May God bless this ship and all who sail in her,” she said.

HII President and CEO Mike Petters also spoke at the ceremony. “Ingalls is building each ship better than the last, and the team’s performance—and the performance of the delivered LPDs—has strengthened the nation’s confidence in the LPD program,” he said. “This was most recently demonstrated by the Navy’s request and the Congressional investment in the 12th San Antonio-class warship—and the Navy’s selection of this proven hull-form for its new LX(R) class of amphibious ships. Ingalls is making a difference.”

“The ship we christen today honors Congressman John P. Murtha, who proudly served his country as both a Marine and a statesman for almost 40 years,” said Ingalls Shipbuilding President Brian Cuccias. “I can’t imagine a more fitting namesake to represent the marvel of American technology, craftsmanship and strength that is LPD 26. Ingalls shipbuilders know that quality matters. We build our warships as though our own sons and daughters will take them into harm’s way—because they may. And because we owe our warfighters our very best. Our shipbuilders put their hearts and souls into every ship we build—as we have for generations. LPD 26 is no exception. Murtha was the most complete and lowest-cost LPD when she was launched, with many key systems finished months ahead of our historical best. So I’m extremely proud of our LPD 26 shipbuilders.”

The San Antonio class is the latest addition to the Navy’s 21st century amphibious assault force. The 684-foot-long, 105-foot-wide ships are used to embark and land Marines, their equipment and supplies ashore via air cushion or conventional landing craft and amphibious assault vehicles, augmented by helicopters or vertical takeoff and landing aircraft such as the MV-22 Osprey. The ships support a Marine Air Ground Task Force across the spectrum of operations, conducting amphibious and expeditionary missions of sea control and power projection to humanitarian assistance and disaster relief missions throughout the first half of the 21st century.