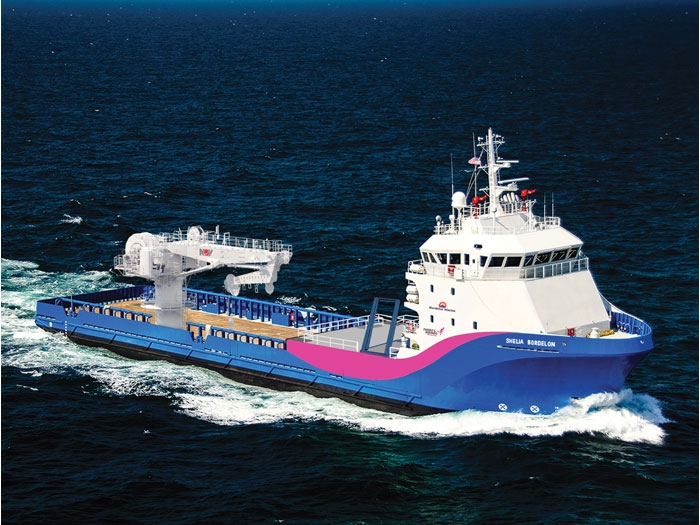 The Sheila Bordelon will feature a dramatic pink stripe and the Susan G. Komen Foundation logo

NOVEMBER 17, 2014—For the entire month of October, sports teams, schools and businesses nationwide go pink in honor of Breast Cancer Awareness. Breast cancer is the second most common cancer among women in the U.S., second only to skin cancer—with one in every eight women in the U.S. diagnosed with the disease during her lifetime. The National Cancer Institute projects that this year, 40,000 women and 430 men will die from breast cancer—while 232,670 women and 2,360 men will be diagnosed with the disease.

The Susan G. Komen Foundation’s mission as a whole is to take on breast cancer from every angle, by funding research and community/educational programs.  It is “the only breast cancer organization that takes on the disease on all fronts—research, community outreach, education, advocacy and global work.” Since its beginnings in 1982, the foundation has invested more than $2.2 billion to the cause with $790 million going to cancer research, and more than $1.5 billion in community grants. Moreover, it has helped drive down cancer mortality rates by 33%.

Those numbers are in large part thanks to the foundation’s Race for the Cure Series. Every year, the foundation’s local affiliates—there are 115 in the U.S., three international affiliates and partnerships in 30 countries worldwide—organize local Race for the Cure events, a series of 5K runs and walks.  Seventy five percent of the net income of each race goes to fund programs offering breast health education and breast cancer screening and treatment programs throughout local communities. The remaining 25% of the proceeds goes to support cancer research.

Companies within the industry have shown their support for breast cancer awareness and the foundation in a variety of ways. Chevron Corporation has the largest corporate team in the Susan G. Komen Foundation’s New Orleans affiliate’s Race for the Cure. Meanwhile, another energy giant, Shell is a major sponsor of the race. In fact, the New Orleans’ affiliate’s Race Chair, Mollie Copeland, is an engineer with Shell.

Joining the good fight (and race) is Louisiana-based marine transportation and services provider, Bordelon Marine. The company announced that it will participate in this year’s race as well as partner with the New Orleans’ affiliate for a year.

Bordelon’s unique contribution comes by way of a very special vessel—the company has promised to donate a portion of the profits from its new Stingray series 260 Class DP2 vessel, the Sheila Bordelon, and participating in the New Orleans Race for the Cure which took place on October 25.

“Komen New Orleans is fortunate to be part of a community where prestigious companies such as Bordelon Marine approach us with unique awareness and fundraising partnerships like the MV Sheila Bordelon,” says Plunkett.

An ultra light intervention vessel, the Sheila Bordelon is currently under construction at Bordelon Marine Shipbuilders in Houma, LA, and will be delivered February 2015. A prominent pink stripe on the hull will show Bordelon Marine’s support for Breast Cancer Awareness, along with a Susan G. Komen New Orleans logo. The 257 ft vessel will be classed by ABS, certified +A1, AMS, DPS-2 ACCU, FiFi 1, SOLAS, USCG L&I.

The vessel’s name and stripe are in honor of Sheila Harasimowicz, Wes Bordelon’s mother-in-law—Wes is president and CEO of Bordelon Marine (both are pictured above). “Through the years all of our vessels have traditionally been named after a Bordelon family member. This time, the family member happens to be from the other side of the family,” explains Wes. “Rather than break tradition, Sheila volunteered to take on an alias. Whatever name she goes by, she is still a huge part of our family, and we are proud to have her name on this vessel. Sheila is a strong and amazing person, with a heart as big as this boat.”

Sheila’s fight with breast cancer began 11 years ago when she was first diagnosed with the disease. After receiving treatment she went into remission where she remained cancer free up until a few months ago when the cancer reappeared.

As Wes tells Marine Log, the company has been involved with the Susan G. Komen foundation for several years—and is always looking for ways to support various causes as well as the community—but when Sheila’s cancer returned, Bordelon as a company decided to do more. “We wanted to meet this challenge head-on. Get people involved, and provide support on many levels,” says Wes. “Taking it one step further was about supporting Sheila. Using a boat to bring attention to the cause is simply one of the tools at our disposal.”

While the idea of a pink stripe on a vessel destined to operate in the oil patch may sound a bit out there, it certainly is a “fun” way to bring attention to such an important cause, quips Wes. “Writing a check is useful, and we encourage others to donate as they can, but creating awareness and inspiring others to act is a huge part of this fight,” he says. “Its truly inspiring to see this in action. We feel that you can really make a difference when you marshal the resources of many.”

Between what the vessel will generate and the participation of Bordelon vendors and client contributions, Wes expects that a fair amount will be raised towards the cause. But he’s quick to remind us that the goal is really to bring attention, and new people to the cause.

“A true test of one’s character, I believe, is to be and act consistently in a way that is not easy, but right, in the face of adversity. Sheila, by any standards is passing this test with flying colors and we’re all inspired by it.” He adds, “I would hope, that if nothing else, this pink stripe and our efforts will encourage people to act.”

Towing for awareness
It began with one request and quickly turned into a company-wide initiative. New York-based towing and transportation company, Moran Towing Corporation, has rallied its support behind breast cancer by going pink.  The company announced on its Facebook page that all the M’s on its tug stacks would be painted pink for the entire month of October.

Ted Tregurtha, President of Moran Towing tells Marine Log, “One of our tug employees contacted me and my father to see if he would be allowed to paint the M’s on his tug to honor a family member.”

That single request quickly had a domino effect across Moran’s fleet. Tregurtha explains that he decided to take the employee’s request one step further, and asked the management team if it would “designate at least one tug in each port to get painted” with the added note that they could paint multiple tugs if their crew wanted to support the cause. “Within a day or two, word came back that everyone wanted to participate in every location and on every tug.” That’s when paint supplier Armorica and John Tertout stepped in to help get the job done.

The wide response “highlights how many of us have been touched [either] directly or indirectly by the disease,” says Tregurtha.  “I think the greatest thing about this is how everyone in the company responded so quickly and enthusiastically. With a relatively large group of employees spread out in many locations it is wonderful to see them all spontaneously rally behind such a worthy cause.”

Hats on for the cause
While operators are painting vessels pink for the cause, Virginia-based Newport News’ employees are wearing pink. The Virginia-based shipbuilder came up with the idea of having its employees wear pink hard hats to raise breast cancer awareness and money all year round.

Safety company, MSA, donated 5,000 pink hard hats to the yard. Each hat was sold for $10 with all proceeds going to the American Cancer Society. “Breast cancer is the most common cancer among American women, and many of us here at Newport News Shipbuilding have been touched by it in some way,” says Newport News’ Jeremy Bustin.

The first 5,000 hats sold out in just three days, enabling Newport News to donate $50,000 directly to the American Cancer Society.  However, Bustin adds, that more hats are on their way and the hope is that the pink hard hat campaign will prompt others to join in on the cause.

For more information on how you can join the fight against breast cancer visit www.komen.org and www.cancer.org