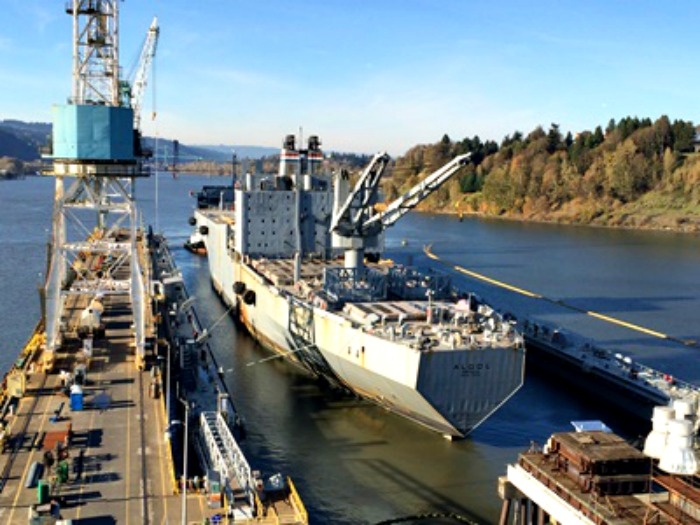 NOVEMBER 25, 2014—The largest floating drydock in North America—the 80,000-ton lifting capacity Vigorous—got busy on November 17 with its first drydocking, after being christened by Vigor Industrial at its Portland, OR, facility.

The 946 ft vehicle cargo ship SS Algol (T-AKR 287) was the first ship to be serviced in the $50-million drydock that was recently christened by Vigor. Algol’s sister vessel, SS Capella, is awaiting repairs at Vigor’s Swan Island shipyard. The Algol, and her sister ship, the SS Capella, are both Fast Sealift Ships operated by the U.S. Maritime Administration. If activated the ships would go into service for the Military Sealift Command (MSC).

“The new drydock is a strategic investment for Vigor and will allow us to meet future demand, grow our business and put more people to work across the Pacific Northwest,” said Vigor CEO Frank Foti of the $50 million of private investment for the Vigorous. “Manufacturing jobs matter because they provide opportunities for people who build things with their hands to earn family wages.”

Foti pointed to a 2013 report by MarAd which estimated that shipyard workers contribute $9.8 billion to the nation’s GDP and take home $7.9 billion in labor income.

Government projects, such as the SS Algol and SS Capella, look to be a growing source of revenue for Vigor. According to the MarAd report, 60% of shipyard work is government jobs.  “Ships like the Military Sealift Command’s vessels are getting larger, while capacity has tightened up because other drydocks on the west coast have gone out of service,” Foti said.

The Algol and Capella are only two of what Dave Byers, Vigor Vice President of ship repair, hopes are more MarAd vessels to come. “The new dock will give us the opportunity to bid several MarAd projects a year,” Byers said. “Without the Vigorous this work would have never come to Portland.”