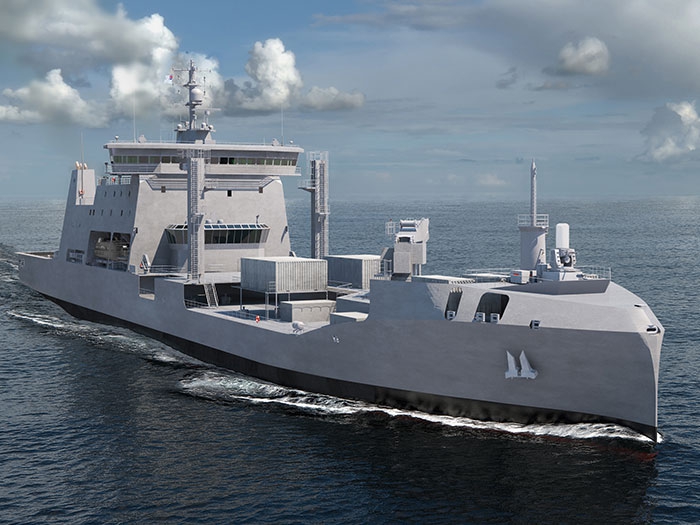 JULY 25, 2016 – South Korea’s Hyundai Heavy Industries (HHI), the world’s largest shipbuilder, has won an order to build a 23,000 ton class logistics support vessel for New Zealand Defence Force’s Maritime Sustainment Capability (MSC) project. HHI was selected as a preferred bidder in December 2015. It will deliver the logistics support vessel to New Zealand by the end of 2019.

The MSC tanker is able to refuel two ships at a time while underway, carry and refuel helicopters, produce and store water, and store and transport bulk goods. The tanker also has ice-strengthening and winterization features for Antarctic base support during summer season.

The vessel features a distinctive Environship Leadge Bow. According to HHI, by riding on top of the waves rather than deflecting them to the sides, this bow shape enables the vessel to run continuously at service speeds regardless of the sea conditions while at the same time reducing fuel consumption and improving crew comfort.

The MSC tanker’s Electric Replenishment/Fueling-at-sea systems allow ease of control and quieter operation while a CODLAD (combined diesel-electric and diesel) propulsion system reduces emissions and ensures longer engine life. The hybrid system uses electricity produced by electric generators as propulsion power at low speed while using a diesel engine at medium speed and both a diesel engine and a propulsion motor at maximum speed.

With the main crane located at the center of the vessel and a wider-than-average operating range of 23 m, the tanker can load and offload container boxes and bulk goods more effectively.