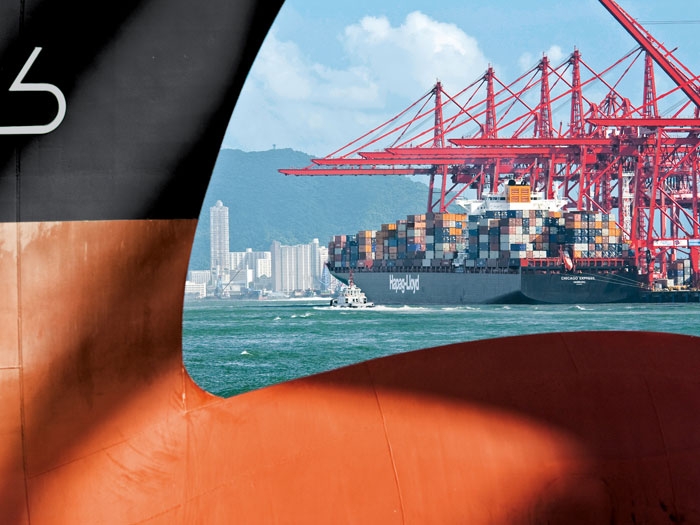 German container shipping giant Hapag-Lloyd signed a $ 372 million facility agreement with a term of 12 years with an international banking syndicate to finance a newbuilding program at a South Korean shipyard. Hapag-Lloyd will use the loan to finance five new vessels, which were ordered from Hyundai Samho Heavy Industries in April 2015 for delivery between October 2016 and May 2017. Hapag-Lloyd says the total investment volume of the order lies in the “mid three-digit million dollar range.”

However, Hapag-Lloyd’s recent merger with Chilean shipping line CSAV now controls 188 ships with a total of 1.6 million TEU, pushing it into fourth place.

Hapag-Lloyd’s five newbuilds will be deployed primarily on the South American routes and will have a capacity of 10,500 TEUs each. With 2,100 reefers plugs each, the vessels are particularly suitable to carry perishable goods. With the investment, Hapag-Lloyd intends to strengthen its position as one of the largest reefer carriers in the world.

The banking syndicate was led by joint bookrunners Credit Agricole, DNB, HSBC and UniCredit. As the order was placed with a Korean shipyard, the Korean Export Credit Agencies K-sure and KEXIM agreed to provide financing support for Hapag-Lloyd to facilitate the investment with the Korean yard and will thereby support the overall financing. Hapag-Lloyd decided in parallel to increase its existing revolving credit facility with the financing banking syndicate from $95 million to $200 million in order to strengthen its liquidity reserves at attractive financing conditions.

Based on the recent ship financing, Hapag-Lloyd also successfully renegotiated conditions for existing vessel financing facilities. In total, the Company was thereby able to decrease its interest burden by approximately $ 40 million over the remaining life of these financing facilities.

“We secured the financing for our new vessels at attractive financial terms,” says Hapag-Lloyd CFO Nicolás Burr. “In addition, based on this new benchmark we were able to significantly reduce our interest burden and at the same time gain more financial flexibility by increasing our liquidity commitments.”

Freeport-McMoran also announced that it has filed with the Securities and Exchange Commission (SEC) a prospectus supplement under which it may offer and sell additional shares of common stock having aggregate gross proceeds of up to $1 billion from time to time through designated sales agents. Sales of the common stock, if any, would be made by means of ordinary brokers’ transactions or block trades on the New York Stock Exchange at market prices or as otherwise agreed with its agents.

Freeport-McMoran intends to use the net proceeds from these offerings for general corporate purposes, which may include, among other things, the repayment of amounts outstanding under its revolving credit facility and other borrowings and the financing of working capital and capital expenditures.

Freeport-McMoran also announced that it continues to engage in discussions to partner with strategic investors interested in investing capital in the development of its oil and gas properties and to consider the previously announced potential initial public offering of a minority interest in Freeport-McMoRan Oil & Gas Inc. (FM O&G) as market conditions warrant. These actions, together with previously announced capital cost revisions, are being pursued as required to fund oil and gas capital spending within cash flow for 2016 and subsequent years.

James R. Moffett, Freeport-McMoran’s Chairman, Richard C. Adkerson, Vice Chairman and Chief Executive Officer and James C. Flores, Vice Chairman and FM O&G Chief Executive Officer, said, “The actions we have taken to cut costs, significantly reduce capital expenditures in our mining and oil and gas businesses and raise equity proceeds are necessary in the current period of weak and uncertain market conditions. These measures and actions we are taking to enhance shareholder value will strengthen our financial position and preserve our valuable resources for improved conditions in the future. We are focused on strong execution of our plans which position us for future success.”