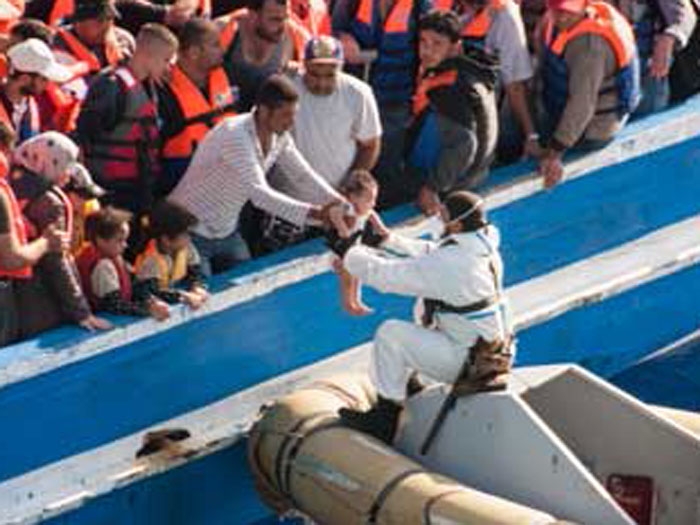 MARCH 3, 2015 — The humanitarian crisis in the Mediterranean Sea is spiralling out of control. EU Member States must act urgently to prevent the loss of thousands more lives, as hundreds of thousands of migrants and refugees seek to escape to Europe in boats that are unfit for purpose and which are largely operated by people smugglers.

This is the key message that the International Chamber of Shipping (ICS), the principal global trade association for ship operators, will deliver to a UN inter-agency meeting on the crisis, being hosted by IMO in London tomorrow.

Merchant ships rescued around 40,000 people during 2014, according to the United Nations High Commissioner for Refugees (UNHCR). But this number is predicted to increase dramatically during 2015 if the political situation in Africa and the Middle East further deteriorates.

ICS says that the burden of responsibility placed on ships and their crews to rescue migrants in distress has been further increased by the replacement of Italy’s humanitarian “Mare Nostrum” operation with the EU funded “Triton” operation, whose primary mandate is border protection and which operates with very limited resources.

“The response to the crisis by the Italian Navy and Coast Guard continues to be incredibly impressive,” said ICS Secretary General, Peter Hinchliffe. “But the situation is now so serious that all EU Member States need to become more engaged. The shipping industry’s concern is that, following the end of Mare Nostrum, other governments are increasingly relying on merchant ships to undertake more and more large-scale rescues.”

ICS says it is also concerned by the more recent phenomenon of ships full of migrants being left to navigate in congested waters without qualified persons in charge, presenting a danger to seafarers in other ships as well as the migrants themselves.

Coastal States have Search and Rescue (SAR) obligations under international law but as the situation gets worse, ICS believes that unless concerted action is taken to prevent criminals from using unsafe craft to transport migrants, there must be a massive increase in state funded resources for SAR operations to meet the growing need in the Mediterranean.

In practice, says ICS, this means that other EU Member States need to share the burden in order to help prevent thousands more deaths.

According to UNHCR, at least 3,500 people lost their lives during 2014 while attempting to cross the Mediterranean from North Africa. There is a risk of further catastrophic losses of life as more desperate people attempt this dangerous sea crossing.

The international shipping industry fully accepts its legal obligations to come to the assistance of anyone in distress at sea. However, “some ships have had to rescue as many as 500 people at a time, with serious implications for the welfare of ships’ crews given the health and security issues involved in dealing with such large numbers. This goes well beyond what should reasonably be expected of merchant seafarers,” says Mr. Hinchliffe.

While more needs to be done to prevent the boats used by people smugglers from being able to depart in the first place, the lawless situation in nations such as Libya and Syria makes this very difficult. ICS therefore believes there is an urgent need for European States (and the international community) to develop a political solution.

“The EU in particular needs to provide refugees and migrants with alternative means of finding safety without risking their lives by crossing the Mediterranean in boats that are unseaworthy and operated by unscrupulous criminals,” says Mr. Hinchliffe. “It is imperative to avoid the impression that a potentially fatal sea crossing in a tiny overcrowded boat is the only realistic pathway to Europe.”

In the short term, however, ICS insists that EU Member States need to do far more to support the Italian Search and Rescue operation (as well as those nations such as Greece, Malta, Cyprus and Turkey which are also on the front line of this problem) and the very large number of rescues being conducted by merchant ships; a situation which ICS says is becoming increasingly untenable.