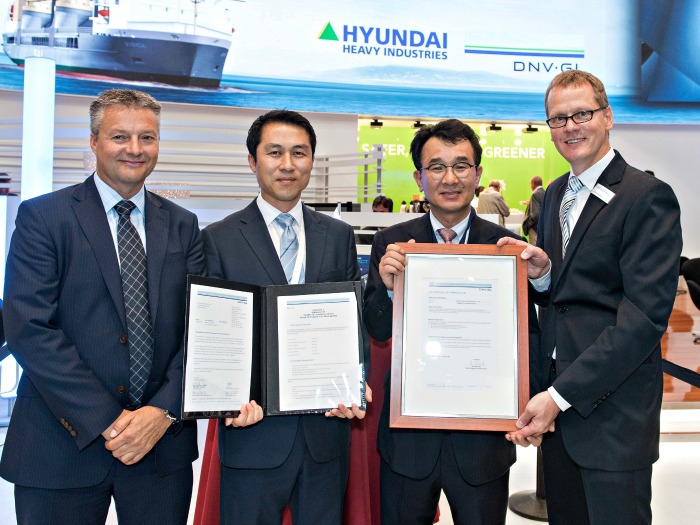 SEPTEMBER 10, 2016—At SMM 2016 this past week in Hamburg, Germany, Korean shipbuilder Hyundai Heavy Industries (HHI) announced it received the second approval in principle (AIP) from DNV GL for SkyBench, an innovative design for maximizing cargo loading capacity of large containerships.

DNV GL verifies the strength and structural analysis including the overall finite element analysis conforming to S11A rule, a partial ship analysis, an overall hatch corner’s relative deformation check, a spot fatigue check for several critical hatch corner locations, and a detailed analysis of the design with a solid model for the parking device. The first AIP HHI received in June last year at the Nor-Shipping exhibition in Oslo was its confirmation of the concept design of SkyBench.

SkyBench has a mobile accommodation block that is mounted on rails and can move over the span of two container bays. The SkyBench allows for additional storage as it utilizes the void space beneath the sliding block. Moreover, the safety of on-board crews is enhanced by the detachable design thanks to the buoyancy in case the ship sinks. The bridge and three upper decks of a “twin island” design containership can be constructed as a separate sliding block mounted on rails which can move over the length of two 40 ft container bays. In combination with a resizing and relocation of fuel tanks and the utilization of the void spaces beneath the accommodation block in the traditional design, SkyBench allows the addition of two extra 20 ft container bays. The resulting cargo increase amounts to 270 TEUs on a 17-row wide 10,000 TEUs ship, 350 TEUs on a 20-row wide 14,000 TEUs ship and 450 TEU on a 23-row wide 19,000 TEU ship.

It takes 10 minutes for SkyBench to operate at port, using four electric drive train units to move the block backwards from its normal position. The two 40ft side casings on which the accommodation block rests provide structural strength and holds lifeboats, provision cranes and utility rooms. Mr. Im Hong-il, senior engineer and team leader of Basic Hull Design Department of HHI’s Shipbuilding Division said, “It has been a great pleasure for us to have the opportunity to work with DNV GL for the successful completion of this project for the past two years. We would also like to extend our appreciation for their two consecutive approvals of the SkyBench and their statement of witness for 2:1 scale SkyBench mock-up test.”