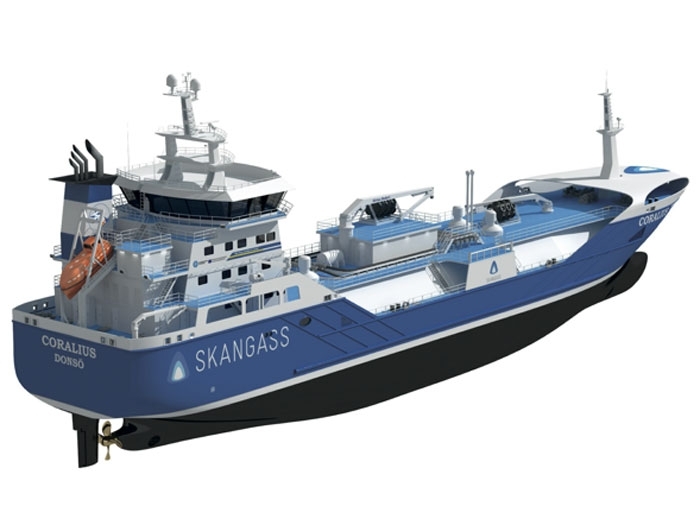 AUGUST 20, 2015 – Classification society DNV GL has developed a new class notation for gas bunker vessels to ensures safe fuel transfer operations from one ship to another.

Until now, says DNV GL, the development of standards guiding gas fuel transfer operations in ports has lagged as the maritime industry focused on developing standards for gas fueled ships rather than on bunkering arrangements.

The new class notation addresses safety concerns in this field and covers gas bunker vessels design and additional requirements to support the development of gas fueled shipping and bunker operations in ports. The rules are flexible and include a variety of gas fuels as well as the configuration of bunker transfer systems.

According to DNV GL, many port authorities still deem ship-to-ship bunker operations as being too risky and oppose efforts to increase the availability of gas fuels in ports.

In places with limited infrastructure and with demands for short turn-over times in ports, flexible ship-to-ship bunkering transfer operation is an efficient solution. DNV GL’s new class notation outlines requirements for liquefied gas carriers and barges that are equipped for carrying liquefied gas and supplying it to gas fueled ships on a regular basis.

“The class notation covers safety issues on the gas bunker vessel, its gas bunker related equipment and installations on board. It outlines requirements for design, construction and operational procedures with regard to connection and disconnection of transfer arrangements, bunker transfer and vapour return,” explains Mr. Ilchenko.

Interest is LNG fueling is growing, with tougher limits on the sulfur content of marine fuels (0.1 per cent) in ECAs that entered into force in January 2015, have increasing the demand for port infrastructure dedicated to bunkering alternative fuels. From 2020 onwards, vessels sailing in all European waters will need to comply with a 0.5 per cent sulfur cap. In addition, the IMO global sulfur limit of 0.5 per cent is expected to come into force in 2020 or 2025, depending on the outcome of a review as to the availability of the required fuel oil.

DNV GL has also developed a GAS READY notation for owners looking to prepare their vessel for a potential conversion to LNG operation at the newbuilding stage. The notation helps owners ensure that their vessels are verifiably in compliance with all safety and operational requirements to meet the applicable global as well as class standards for gas fuelled operations. It also supports owners in specifying and quantifying the level of investment they need to make.