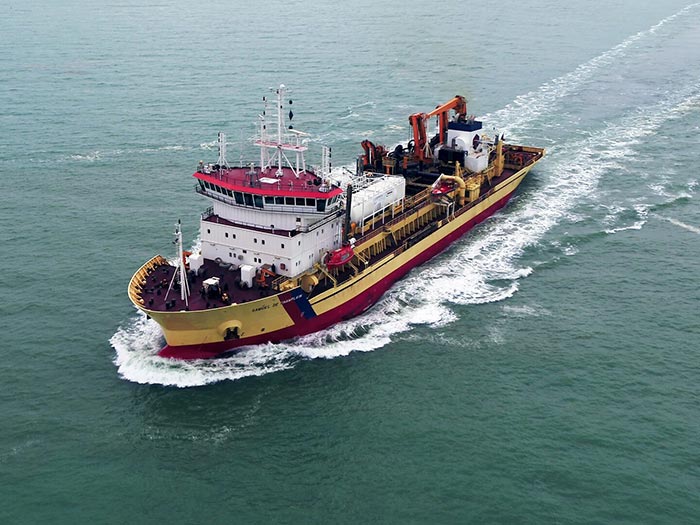 The first conversion of its kind to be completed in Europe, the project is part of an EU-supported initiative to promote LNG propulsion in short-sea vessels operating along the European Atlantic coast.

The 8,500 cubic meter trailing suction hopper dredge is owned by Rouen, France, based GIE Dragages-Ports and operated by Port of Nantes-Saint-Nazaire.

Its conversion was carried out in Damen Shiprepair’s Dunkirk, France, shipyard and involved the replacement of the vessel’s diesel-electric MGO-burning propulsion system with three MAN 6L35/44DF dual-fuel engines, as well as the installation of onboard LNG storage facilities.

Louis-Marie Rouxel, Project Manager for Damen, said: “The main reason for choosing MAN was the performance of its highly competitive 35/44 DF engine in response to load impacts. The unique demands of dredges required engines capable of supporting great loads and, as a result of our studies, it turned out that this was the engine that best met these parameters.”

Lex Nijsen, Head of Four-Stroke Marine Sales, MAN Energy Solutions, said: “This is a significant moment for European shipping, as evident by the support the EU is offering. This conversion is just the beginning of a path that will lead to a comprehensive LNG infrastructure around the continent in the pursuit of more efficient propulsion and cleaner emissions. I’m very happy that the MAN 35/44DF engine has been deemed worthy of meeting the demanding criteria that both the dredger world and this broader project require.”

The Samuel de Champlain was built in 2002 and is the largest dredge in the GIE Dragages-Ports fleet. Based in the Port of Nantes-Saint-Nazaire, the vessel operates between the Loire and Seine estuaries.

Among the advantages that led Damen and Dragages-Ports to select an MAN 35/44DF propulsion solution were: