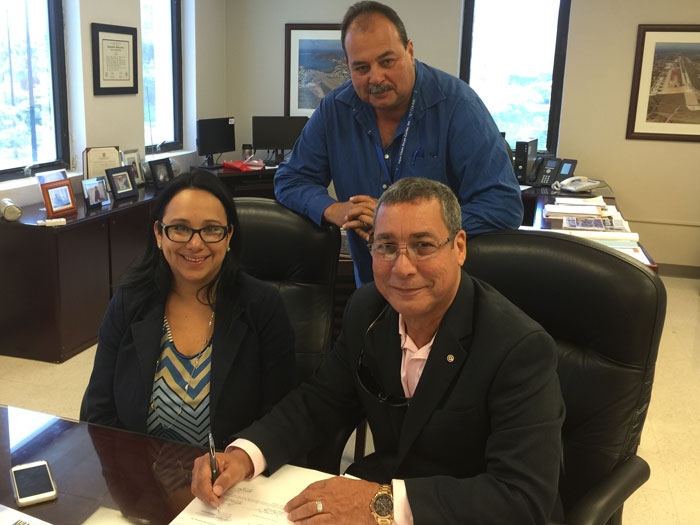 MAY 11, 2015 — Crowley Puerto Rico Services, Inc. has executed a $48.5 million construction contract for a new pier at its Isla Grande Terminal in San Juan, Puerto Rico. In conjunction with the investment, the company and the Puerto Rico Ports Authority (PRPA) have also concluded a 30-year lease extension for the Isla Grande property.

Crowley’s terminal expansion plans also include the installation of three new ship-to-shore container gantry cranes, which will be supplied under a separate contract.

“This is a great day for Crowley and the people of Puerto Rico, and a critical next step in our nearly $500 million re-investment in the Puerto Rico trade lane,” said Jose “Pache” Ayala, Crowley vice president, Puerto Rico. “This important project represents close collaboration between private business and PRPA to make a major investment in the infrastructure of Puerto Rico. We are very excited to choose a Puerto Rico-based construction company who will utilize workers on the island and keep the money in the local economy.”

The pier design, using the latest displacement-based performance criteria, has been carefully developed over the past year with the PRPA and Harbor Consulting Engineers, Inc., of Seattle, Wash. As the lead design firm for the project, Harbor is the engineer of record for the project and the duration of the construction. Crowley and Harbor have worked together on infrastructure projects for nearly 40 years.

Now that construction and lease contracts have been signed, Crowley is completing the acquisition of the necessary permits, including those from the U.S. Army Corps of Engineers and other local agencies, which will allow the company to break ground in the coming months. Construction is expected to be complete in April 2017, in advance of the inaugural call of the first new Commitment Class ship, El Coqui.

“This level of investment in the Puerto Rico trade is unprecedented,” said John Hourihan, Crowley senior vice president and general manager, Puerto Rico. “We are excited about the cooperation and support we have received for this project from the PRPA.”

While Crowley builds for the future, the company is responding to the needs of today.

Since mid December, Crowley has, through a number of service enhancements, created additional weekly cargo carrying capacity. Included in these enhancements was the addition of a new flat-deck barge capable of carrying up to 400 additional loads between Jacksonville, Fla., and Puerto Rico. Crowley has also ordered and begun placing into service more than 7,000 pieces of new cargo handling equipment, including 40-foot, 45-foot and 48-foot high cube containers, 20-foot ISO tanks and a variety of fixed and slider chassis.

Crowley has served the Puerto Rico market since 1954, longer than any other carrier in the trade, and occupied the now 75-acre Isla Grande Terminal the entire time, making it the longest continual occupant of any Jones Act carrier in the trade. The company, with over 250 Puerto Rico employees, is also the No. 1 ocean carrier between the island commonwealth and the U.S. mainland with more weekly sailings and more cargo carried annually than any other shipping line.