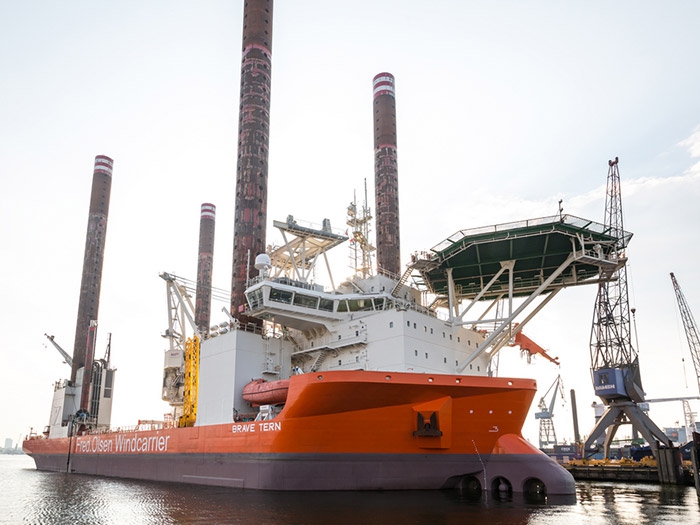 AUGUST 10, 2018 — Brave Tern, a 132 m jack-up installation vessel operated by Fred. Olsen Windcarrier AS, has completed a major crane refit at Damen Shiprepair Amsterdam to allows it to install and maintain the next generation of offshore wind turbines.

The main operation carried out at the shipyard was the insertion of a 20 m section into the main boom of the vessel’s 800-tonne crane, allowing it to reach a height of 120 m. This upgrade now allows it to install and maintain the next generation of wind turbines.

The operation to insert the additional section took 30 days in total. All the crane wires had to be unreeved before the crane boom could be dropped down to rest on a support structure built from containers. The boom was then cut in two and the new section inserted and secured using flanges. Following the completion of the new boom the wires were re-reeved and a series of load tests conducted before the crane was certified ready for operations.

To secure the order, the shipyard offered a fast turnaround time without any loss of quality or attention to detail. Not only was the project time highly competitive, the actual order was only received the day before the vessel arrived at the yard. However, the shipyard had the necessary capacity available and the next few days (a weekend) were spent setting up the project office, building the boom rest structure and positioning the mobile cranes.

This was the first visit by the Brave Tern to Damen Shiprepair Amsterdam.

Ove T. Rylandsholm of Fred. Olsen Windcarrier AS, commented: “We were very impressed with the service and support provided by managers and staff at Damen Shiprepair Amsterdam. They had very little notice ahead of the vessel’s arrival, but they demonstrated a high degree of professionalism and their solution-oriented approach to the various tasks was just what we needed. It has been a pleasure to work with them.”

The upgrade of the Brave Tern is part of a wider program by Fred. Olsen Windcarrier to bring both its jack-ups up to the standard required to meet the needs of the new generation of 8MW plus wind turbines. As well as the crane boom extensions, the legs on both vessels have had an additional 14 m added.

Following the works at Damen Shiprepair Amsterdam, the Brave Tern is now ready to install the latest, high capacity wind turbine generators such as the 8MW MVOW V164. The vessel can carry four complete units (tower, nacelle and blades) per loadout.