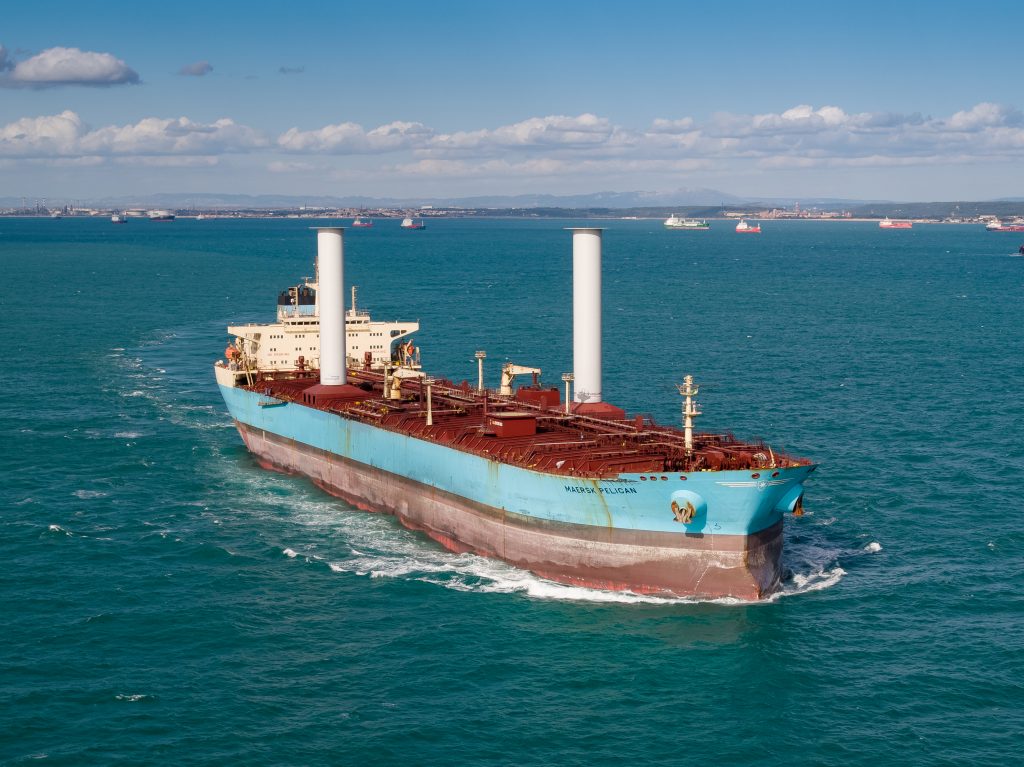 The company’s rotor sails are currently being used on board the Maersk Pelican tanker (seen here), the Viking Grace cruise ferry, and the RoRo ship Estraden.

With economies under stress from COVID-19, carbon emissions this year will be down for the first time since 2008. Tuomas Riski, Norsepower CEO, believes this gives shipping an opportunity to pivot on carbon. In this edition of Marine Log’s CEO Spotlight, Riski also gives insight into how Norsepower’s rotor sails are making progress in the industry’s efforts reduce emissions.

Norsepower Oy Ltd., a Finnish clean tech and engineering company, has pioneered modern auxiliary wind propulsion for the global maritime industry. It claims that its rotor sail solution is now a proven, low-maintenance, easy-to-use and reliable fuel-saving technology that supports the decarbonization of shipping. The company’s rotor sails are currently being used on board the Maersk Pelican tanker, the Viking Grace cruise ferry, and the RoRo ship Estraden:

Marine Log (ML): We’re all dealing with COVID-19 at the moment. From your perspective, how is the virus impacting maritime operations, primarily global emissions and what does this mean for rotor sails?

Tuomas Riski (TR): During the last month, fuel prices have collapsed and payback periods for fuel saving investments, such as the rotor sail have roughly doubled. However, we expect that the low fuel prices will be a short-term phenomenon and in the long term, both the development of low carbon fuel prices and particularly environmental regulations such as CO2 taxes and emissions trading will considerably improve the market for environmental technologies such as Rotor Sails.

ML: What was the first Norsepower rotor sail installation and when, and how many at sea or on order now?

TR: We made the first commercial installation of a Norsepower rotor sail in 2014 on the M/S Estraden, a 9,700 DWT RO/RO vessel owned by Bore. Two of the smallest (18 meter high x 3 meter diameter) rotor sails have reduced the average fuel consumption by 6.1%—equaling around 400 metric tonnes per year. This saving has been measured and independently verified by NAPA, the leading maritime data analysis, software, and services provider.

In April 2018, we successfully installed our rotor sail solution on board the M/S Viking Grace, an LNG-fueled cruise ferry. The 57,565 GT M/S Viking Grace currently operates in the archipelago between Turku (Finland) and Stockholm (Sweden), and is one of the most environmentally friendly cruise ferries in the global maritime industry.

With the addition of Norsepower’s technology, the vessel has been independently verified by three external research bodies, including ABB, NAPA and Chalmers University, to reduce its carbon emissions by up to 900 tonnes annually; equivalent to cutting up to 300 tonnes of LNG fuel per year—making it the world’s first LNG/wind electric propulsion hybrid cruise ferry.

Maersk Tankers installed two large Rotor Sails (30 meters x 5 meters), on their LR2 tanker Maersk Pelican. The installation was completed in the beginning of September 2018 and she’s been trading on the spot market. The first year of operation included a measurement campaign to verify the fuel saving performance of the rotor sails.

Lloyd’s Register (LR) concluded that the average fuel savings were 8.2% during the first year of operation. The project team also included Shell and was financially supported by ETI (Energy Technology Institute), a British government owned research and funding organization.

Sales leads have developed well since we were able to confirm and share the very strong performance results from the Maersk Pelican. We continue having positive conversations with shipowners, charterers, and shipyards following our successes, and are taking steps to study the technical and economic feasibility of wind propulsion on their fleets.

ML: What subsidies and funding have you received from various sources?

TR: Since our establishment in November 2012, we have generated more than €20 million of funding. Norsepower has been funded by the European Commission, Power Fund II, Business Finland – the Finnish Funding Agency for Technology and Innovation, and, most recently, in the summer of 2019 by OGCI Climate Investments.

TR: All the pilot projects that we have initiated have led to the continuous usage of rotor sails, and for instance our first customer, Bore has, after the successful pilot project, purchased the rotor sails from us, which have since them been maintained by Norsepower.

As a company, we also offer an alternative delivery model for rotor sails under a “Pay-As-You-Save” system. The idea is to minimize upfront investment and have a service agreement and monthly payments based on the fuel savings that can be achieved with Rotor Sails. This has been designed to reduce the barrier to entry and provide the added benefits of a service agreement rather than a one-off purchase of a product.

ML: In a recent one-year test on board the Maersk Pelican, two rotor sails aggregated a total fuel saving of 8.2%. Do you have similar examples of how rotor sails have led to cost savings for operators?

TR: As mentioned above, independent tests have been conducted on the M/S Viking Grace and M/S Estraden, both of which showed significant fuel savings and reduced carbon emissions.

Independent data analysis indicates that even greater savings can be achieved, particularly when the rotor sails are fitted in conjunction with other efficiency measures. For example, when installed aboard the M/VS Scandlines Copenhagen, Norsepower’s rotor sails will sit alongside measures such as hydrodynamic hull optimization, and a hybrid electric propulsion system with a battery powered energy storage system.

Current reports suggest that up to 20% of fuel saving per year is possible when several rotor sails are used on a route that has favorable wind conditions.

ML: What is Norsepower doing in to protect its employees and customers during this time?

TR: All of our employees are currently working from home and following social distancing measures, whether they usually work at the office or on the service side of the business. We are following government legislation and regulations and keeping up to date with current advice to ensure the highest level of safety to both employees and customers during the current circumstances.