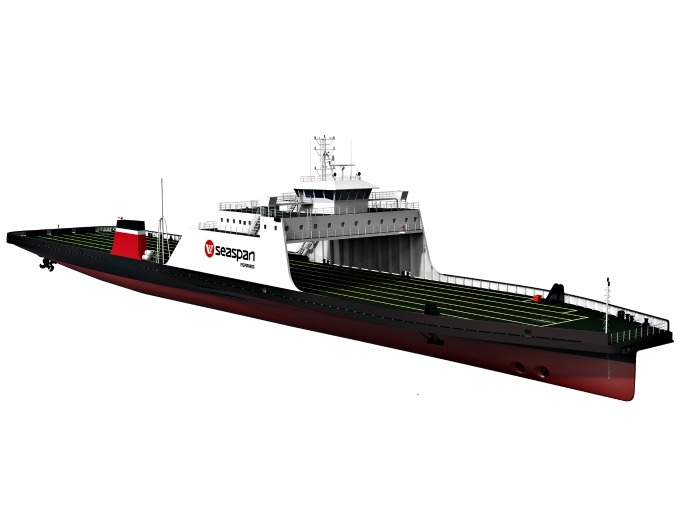 British Columbia-based Seaspan Ferries has chosen BV class for two hybrid LNG/diesel/battery-powered Roll-On/Roll-Off cargo ferries that will be built at the Sedef yard in Turkey.

Philippe Donche-Gay, Executive Vice-President and Managing Director of the Marine & Offshore Division, Bureau Veritas, says, “BV really knows LNG. We have extensive experience of handling LNG and using LNG as a fuel with our gas carrier fleet. Our ability to deploy that expertise for the benefit of shipyards and owners who are both breaking new ground was crucial to these owners entrusting BV with the classification of these vessels.”

The 148.9 m Seaspan ferries are due for delivery in 2016 and will operate on Canada’s west coast, carrying up to 59 trailers at speeds of up to 16 knots propelled by azimuthing drives. Twin dual-fuel W9L 34DF generators will be able to burn LNG from one single 200m3 Type C tank below the main deck and there will be a hybrid battery pack power supply for generating zero emissions energy at quay or during maneuvering and for any low-load operation.

Donche-Gay says, “Now that IMO has updated and adopted the IGF Code, the regulatory worries which were holding back owners have been removed and there are a host of new gas fuel projects about to start as owners take advantage of this clean and economical fuel. BV’s expertise in risk assessment complements its experience with gas carriers, which is why we are the class of choice for innovative gas fuel projects. We are currently engaged in gas fuel conversion or newbuilding projects involving chemical tankers, small-scale LNG tankers, LNG bunker tankers, cargo and passenger ferries, product tankers and tugs, and we expect to announce more in the near future.”