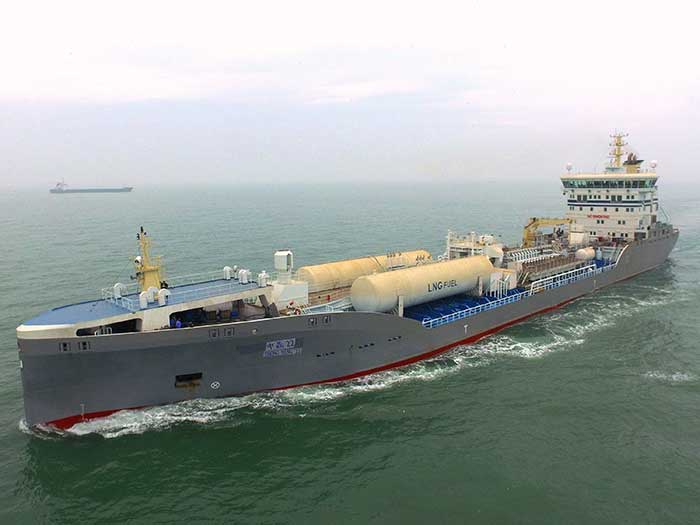 It is the first vessel to be powered by a dual-fuel two-stroke engine using the low-pressure X-DF gas admission technology developed by Winterthur Gas & Diesel (WinGD). The 5-cylinder, 500 mm bore, Wärtsilä RT-flex50DF is installed as the main engine driving a single propeller.

The Ternsund marked the first installation of this engine type which was done under BV class.

Philippe Donche-Gay, President of Bureau Veritas Marine & Offshore Division says, “We led the way globally classing dual-fuel gas carriers and we are now leading the way with newbuildings of different ship types using LNG as fuel. Step by step shipping is moving to cleaner fuels and Bureau Veritas is helping it to do that safely and with confidence.”

Ternsund is an IMO Type 2 oil/chemical tanker able to carry nine grades of cargo in 16 different tanks. It will operate in North European waters under charter to a Finnish company. The Wärtsilä RT-flex50-D dual-fuel low-speed engine will deliver 5,850 kW propelling the 147 m LOA vessel via a CPP propeller delivering a service speed of 14.5 knots. LNG as fuel is stored on board in two Type C tanks on deck, containing 315 cu m of LNG each.