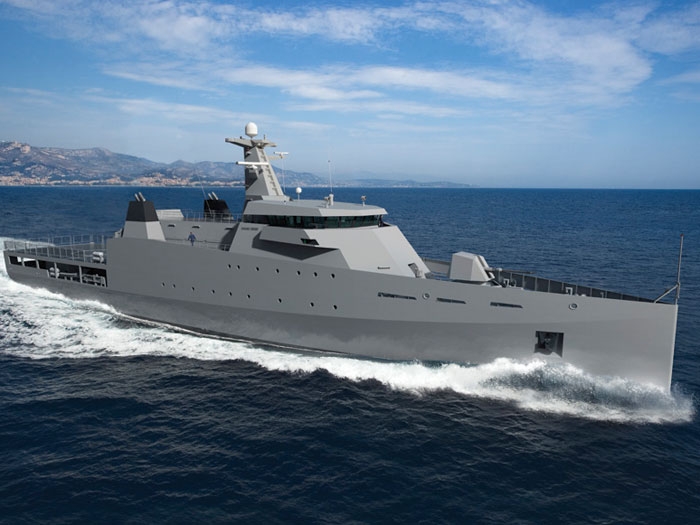 Damen OPV is one of three shortlisted

A major beneficiary is ASC in Adelaide. It has been facing a so-called “valley of death” on completion of the current Air Warfare Destroyer Program (AWD). Now it will get to build an unspecified number of OPVs to bridge the gap until the start of the Future Frigates.

A joint statement from Prime Minister Malcolm Turnbull and Minister of Defence Marise Payne says that the “announcements provide for two shipyards [ASC and Austal] to implement the Government’s commitment to a continuous build of naval surface ships in Australia.

“Major warships will be built in Adelaide and minor vessels in Henderson, Western Australia.

“These three projects will ensure Australia retains a sovereign capability to build and sustain its naval vessels. Together they represent close to A$40 billion worth of investment in Australia’s future naval capabilities and our naval shipbuilding industry.

“They will directly secure more than 2,500 jobs for decades to come. They will also generate thousands of additional jobs with suppliers.”

Both the Offshore Patrol Vessels and the Pacific Patrol Boats will be steel hulled.

First pass approval has been given for the Offshore Patrol Vessel program that will see construction to begin [at ASC] in Adelaide from 2018, following the completion of the Air Warfare Destroyers and transfer to Austal in Western Australia when the Future Frigate construction begins in Adelaide in 2020. This approach ensures that jobs and skills are retained in Adelaide.

As part of the Competitive Evaluation Process three designers have been shortlisted; Damen of the Netherlands, Fassmer of Germany, and Lurssen of Germany to refine their designs.

This program is estimated to be worth more than A$3 billion and will create over 400 direct jobs.

First pass approval for the Future Frigates sees three designers – BAE Systems with the Type 26 Frigate; Fincantieri with the FREMM Frigate, and Navantia with a redesigned F100 – short-listed to refine their designs.

The frigates will all be built [by ASC] in Adelaide, incorporating the Australian-developed CEA Phased-Array Radar.The Competitive Evaluation Process is on schedule to return second pass approval in 2018, which will allow for construction to commence in Adelaide in 2020.

This program is estimated to be worth more than A$35 billion, and will directly create over 2,000 jobs.

Australia’s previous Minister of Defence, Kevin Andrews, announced the Request for Tender (RFT) for up to 21 replacement – Australian-made – Pacific Patrol Boats in March last year (see earlier story). They are being built under a program that sees Australia provides patrol boats to Pacific island countries to enable them take an active part in securing their own extensive Exclusive Economic Zones.

Subject to negotiations, this program is estimated to be worth more than A$500 million and will directly create over 130 jobs.

Building steel vessels is a new venture for Austal, which says the Pacific Patrol Boat program will extend its shipbuilding skills in that material, “which will be important for the future construction of Offshore Patrol Vessels.”

The Prime Minister and Defence Minister said more at a press conference today that also involved the Chief of Navy. Read the transcript HERE