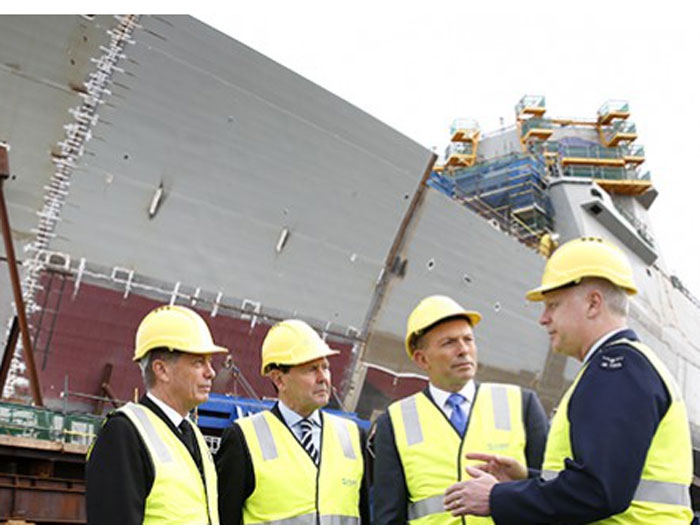 AUGUST 4, 2015 — The Australian Government has thrown domestic shipbuilders an A$89 billion (US$ 66 billion) lifeline — but not in time, say local commentators, to avoid a “valley of death” in which jobs and skills are lost before new orders arrive. It’s also still unclear whether local yards will benefit from a submarine program that accounts for a hefty chunk of the promised funding.

The Government says it is “delivering a long-term plan for a strong and sustainable naval shipbuilding industry” and that over the next 20 years it will invest over $89 billion in ships and submarines for the Navy.

This, it says, will generate significant economic growth and sustain several thousand Australian jobs over decades.

“The Government will implement a continuous build of surface warships in Australia,” says the official handout. “This means that Australia’s shipbuilding workforce will build Navy’s Future Frigates and Offshore Patrol Vessels.

“It’s the first time that any Australian government has committed to a permanent naval shipbuilding industry.

The third major pillar of the Government’s naval shipbuilding plan will be based on the outcomes of the Competitive Evaluation Process (CEP) for Australia’s future submarine.

Overseen by an independent panel of experts, the CEP will ensure that capability, cost, schedule, and key strategic considerations – along with Australian industry involvement – are carefully and methodically considered by the Department of Defence. There will be more submarines and more submarine-related jobs in Australia.

Following a forensic audit, and building on significant improvements made through the recent interim phase of reforms, the Government says it is “acting decisively to reform the AWD program.”  By the end of October 2015 substantial additional shipbuilding management expertise will be inserted into the AWD programme and an additional $1.2 billion will be invested in the program budget.

The Government will also undertake further reform of ASC to ensure Australian shipbuilding is best structured to support a continuous build programme and future naval projects are delivered on time and on budget.

To this end, the Government has commissioned a strategic review of ASC’s shipbuilding capacity. The review will consider how best to implement long-term arrangements.

“Recognizing that the Adelaide shipyards and workforce are strategic national assets,” says the Government, “the review will consider options to ensure they are structured to support the Government’s commitment to naval shipbuilding.  This will include discussions with the South Australian Government on the future of its Common User Facility at Techport, which forms an important part of the Adelaide shipyards.”The outcomes of the review will be considered in conjunction with future decisions on submarines and surface shipbuilding programs.