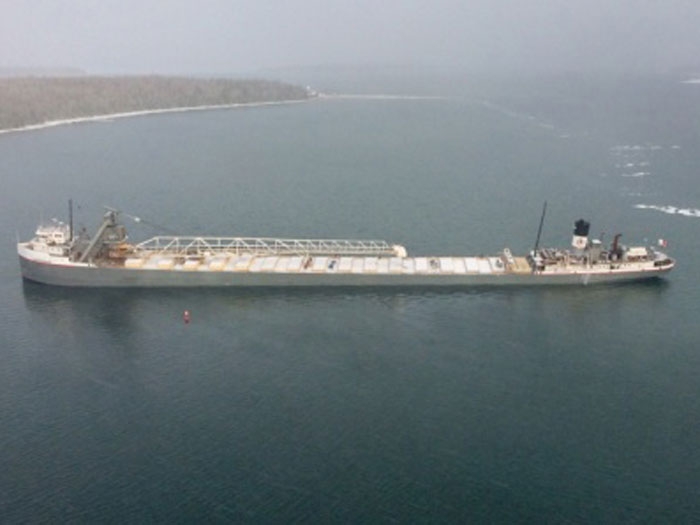 APRIL 22, 2015 — Bulker groundings have been keeping U.S. Coast Guard District 9 busy. The district was able to report that by 7:00 a.m. this morning the Polstream bulker Juno, which grounded Monday in the vicinity of Wellesley Island in the St. Lawrence River, NY, had been refloated and that, at 8 a.m., the Saint Lawrence Seaway Development Corporation had reopened the American Narrows to full navigation. Meantime, though, District 9 was dealing with the grounding of another bulker, this one in the St. Marys River near De Tour Village, MI, early Wednesday.

The motor vessel Mississagi, a Canadian-flagged self-discharging bulk carrier with a load of stone, was transiting downbound the St. Marys River from Bruce Mines, Ontario, when it ran aground in the Potagannissing Bay approximately 4 miles northeast of De Tour Village.

At about 1:00 a.m., the master of the Mississagi, which is owned by Rand Logistics’ Lower Lakes Towing, notified a watchstander at Coast Guard Sector Sault Ste Marie, MI, that the carrier was hard aground on shoal water in the vicinity of De Tour Village.

The Coast Guard reported that the bow of the vessel was aground, with the fuel tanks located near the stern of the vessel.
Vessel navigation in the St. Marys River was unimpeded.

In its most recent update, the Coast Guard said that the crew of the vessel was working with the Northeast Tech Salvage Company to create a salvage plan and thar a 500-yard safety zone was being estab;ished around the vessel.