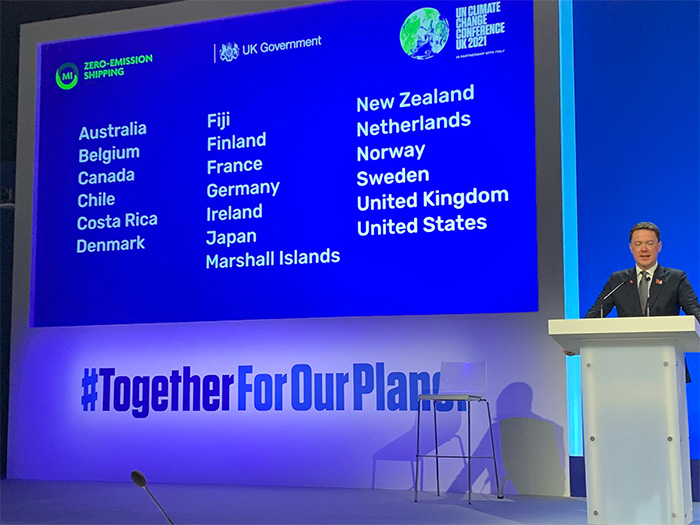 At COP26 yesterday, the concept took a significant step towards reality when the U.K. launched the Clydebank Declaration for Green Shipping Corridors with 19 countries — including the U.S.— already among the signatories.

After reading the wording of the declaration itself and seeing who the signatories are, it’s clear that the Clydebank Declaration marks at least a first step towards implementation of the kind of trade lanes discussed in a new study just released by the Getting to Zero Coalition.

Called “The Next Wave: Green Corridors,” it shows that developing Green Corridors can cut through the complexity and accelerate the transition to zero-emission shipping.

The Next Wave draws its conclusions based on studies of three different corridors, each representing a different kind of opportunity for the transition: the Australia-Japan iron ore corridor, the Asia-Europe container route, and the Korea-Japan-U.S. pure car carrier (PCC) corridor. The case studies were undertaken in consultation with more than 30 companies across the value chain, including many who are active on the routes in question.

“For zero-emission shipping to be successful, it must be an economically competitive option for companies like Star Bulk. Green Corridors are trading routes where policy support and collaboration in the industry could ensure that benefits to first movers outweigh the costs and the risks that they are taking,” says Charis Plakantonaki, Chief Strategy Officer, Star Bulk Carriers Corp.

On all green corridors, says the Getting to Zero Coalition, the success factors are likely be similar: corridor-level consensus on fuel pathways, policy support to help close the cost-gap for higher-cost zero-emission fuels, and value-chain initiatives to pool demand. Aligning on a corridor-specific decarbonization roadmap based on these factors could provide all stakeholders with the confidence that is needed to invest, co-ordinate, and deliver the solutions at scale required by 2030.