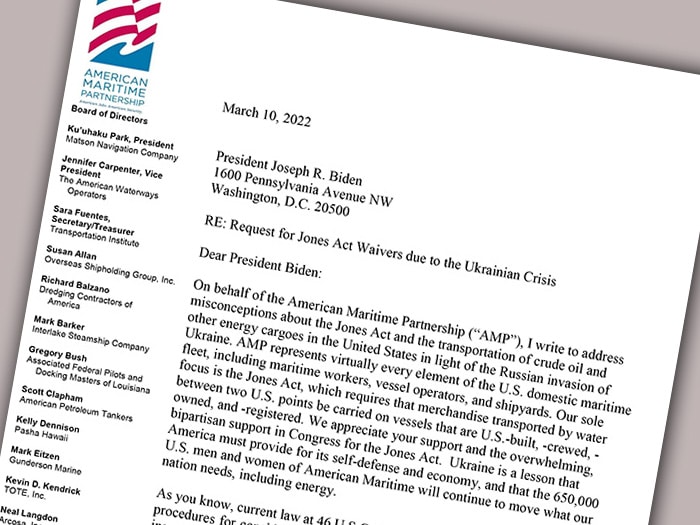 With concerns that the ban on Russian energy imports could be used as a pretext for seeking Jones Act waivers, the American Maritime Partnership (AMP) today sent a letter on the issue to President Joe Biden to address misconceptions about the Jones Act.

Signed by AMP president Ku’uhaku Park, the letter specifically addresses the transportation of crude oil and other energy cargoes in the United States in light of the Russian invasion of Ukraine.

“Calls for waivers to the Jones Act now are both inconsistent with current law and unnecessary,” Park writes. “As you may know, one waiver was already requested last week under the well-established procedures at Section 501, and that waiver request was withdrawn when CBP and the Maritime Administration determined that many American vessels were readily available. Obviously, the requester of that waiver had made no attempt to identify Jones Act-qualified vessels, a textbook example of the lengths some will go to circumvent U.S. law in order to make a profit in the middle of a world crisis. We saw similar examples of unwarranted and self-serving waiver requests after the Colonial Pipeline cyberattack last year, most of which were found to be unlawful. Today, we are seeing calls for waivers in locations that are already served by American vessels and where additional deliveries of domestic oil are viable.”

Among key points made in the letter:

Read the full letter below: