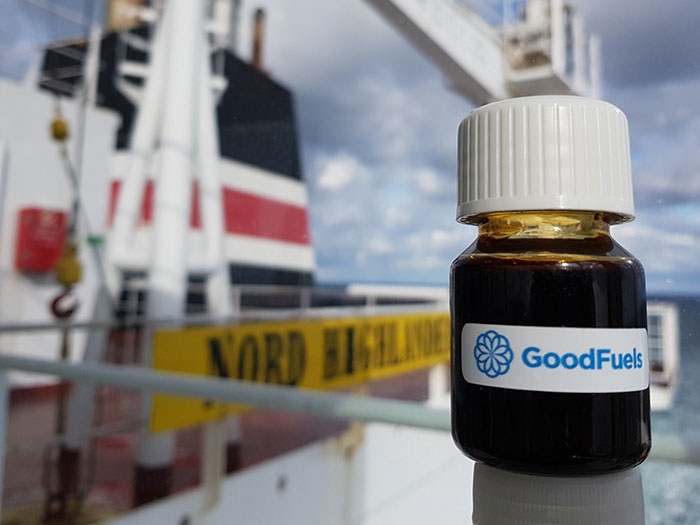 NOVEMBER 30, 2018 – Danish operator Norden A/S has successfully completed trials of a marine biofuel that is a “drop in” equivalent to Heavy Fuel Oil (HFO), that almost entirely reduces all carbon and sulfur emissions, according to its developer, Netherlands based GoodFuels Marine.

The trials were conducted on the 37,000 dwt handysize product tanker vessel Nord Highlander as she ran in typical commercial operation in the North and Baltic Seas and saw hundreds of tonnes of “drop in” BFO taken onboard in the Amsterdam-Rotterdam-Antwerp region.

GoodFuels says the successful operation effectively means that there is the capability to future-proof fuel requirements for shipowners and operators seeking an alternative to both distillates and Ultra Low Sulfur Fuel Oil (ULSFO) in order to comply with the IMO 2020 sulfur cap requirements, as well as impending GHG reduction targets. Dirk

“We want to greatly thank Norden A/S for being a pioneer and for joining us as we take this crucial step towards developing a carbon-busting solution that is scalable, truly sustainable, technically compliant and – crucially – affordable,” said Dirk Kronemeijer, CEO, GoodFuels Marine. “In our journey so far we have focused on realizing the wide-scale use of bio-marine gas oil (MGO) equivalent biofuel, but for over three years we have been working day and night to develop our BFO solution.

“The importance of its arrival in the market is further underlined by the dual prospect of impending lower sulfur and carbon legislation. Bringing this to market now offers shipping a near-zero carbon and SOx alternative to HFO, and VLSFO – 0.5% blended fossil fuel – both of which will be prevalent in the market post-2020. From this point onwards we want to scale supply as fast as we can in order to actively contribute to the world’s 1.5 degree challenge.”

“Norden is proud to be at the forefront of testing and introducing CO2 neutral fuel that truly makes an impact on the highly important agenda of reducing the carbon footprint of shipping,” said Jan Rindbo, CEO, Norden. “Norden has come a long way in increasing fuel efficiency and has reduced CO2 emissions per tonne cargo transported on owned tanker vessels by 25% between 2007 to 2017. With the newly introduced IMO targets on CO2 reductions, however, it is evident that increased fuel efficiency alone is not enough. We need alternative solutions and with this test, Norden has shown a viable method towards reaching these targets.

“Now that we have proven CO2 neutral transport as a viable alternative, I am convinced many carbon-conscious customers will demand this type of transport within the foreseeable future.”