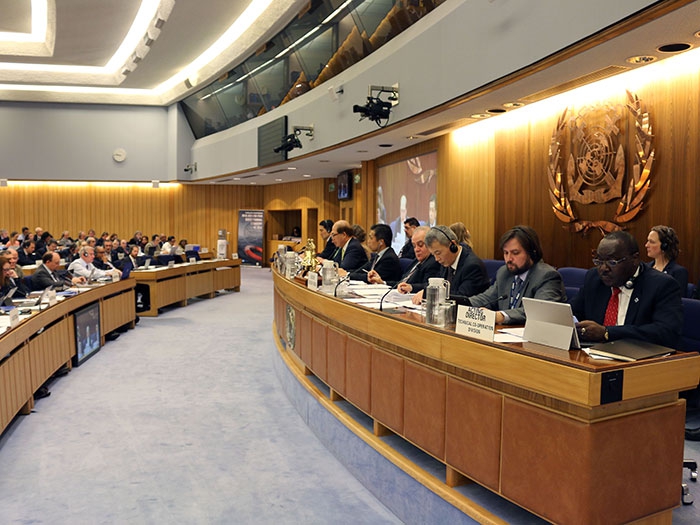 APRIL 9, 2018 — IMO’s Marine Environment Protection Committee (MEPC 72) is meeting in London this week. The most prominent — and contentious — item on the agenda is setting a strategy for the further reduction of GHG emissions (notably CO2 emissions) by shipping that will match the expectations of the Paris Agreement on climate change.

Last week a working group tried to thrash something out, but its not clear how far it got in achieving any kind of consensus between some pretty divergent views that  ranged from no outright cap on carbon emissions to a 100% drop by 2035.

European Union member states have been pushing a proposal for a 70-100% cut in shipping’s carbon emissions from 2008’s levels by 2050.

A separate group of nine countries including Brazil, Saudi Arabia and India have proposed that there should be no outright cap on shipping sector emissions.

Platts quotes one source as saying that the eventual draft strategy taken to this week’s MEPC meeting might suggest a compromise position of a 50% cut from 2008’s levels by 2050.

Addressing the opening MEPC session this morning, IMO Secretary General Kitack Lim referred to the “good progress made by the intersessional working group” and urged MEPC delegates “to break new ground and to demonstrate the best cooperative spirit, in the interest of the Organization and above all, in the interest of maritime communities and future generations.”

“This Strategy that you decided to adopt this week is designed as a strong statement addressed to the outside world and, as a platform, will pave the way forward for future work related to reduction of GHG emissions from ships,” he said. “In that sense we should all keep in mind that this initial strategy is not a final stage but rather a key starting point.”

The MEPC will also address the implementation of the 0.50% marine sulfur limit. Significantly, MEPC is expected to approve draft amendments to prohibit the carriage by ships of non-compliant fuel oil (except when ships are fitted with measures such as exhaust gas scrubbers).

HFO IN THE ARCTIC

Also being considered is a ban on use of heavy fuel oil (HFO) in Arctic shipping.

A proposal, cosponsored by Finland, Germany, Iceland, Netherlands, New Zealand, Norway, Sweden and the U.S., calls for a ban on HFO, and is one of several papers on HFO use in the Arctic to be discussed at MEPC as it considers “development of measures to reduce risks of use and carriage of heavy fuel oil as fuel by ships in Arctic waters”.

That ban is supported by the Clean Arctic Alliance, a coalition of 18 non-governmental organizations working to end HFO use as marine fuel in Arctic waters.

Already banned in Antarctic waters, if HFO is spilled in cold polar waters, it breaks down slowly, proving almost impossible to clean up.

The Clean Arctic Alliance says that an HFO spill would have long-term devastating effects on Arctic indigenous communities, livelihoods and the marine ecosystems they depend upon. HFO is also a greater source of harmful emissions of air pollutants, such as sulfur oxide, and particulate matter, including black carbon, than alternative fuels such as distillate fuel and liquefied natural gas (LNG). When emitted and deposited on Arctic snow or ice, the climate warming effect of black carbon is up to five times more than when emitted at lower latitudes, such as in the tropics.

Those are just a few of the items on the MEPC agenda. You can get an idea of the scope of the meeting by reading Secretary General Kitack Lim’s opening address HERE