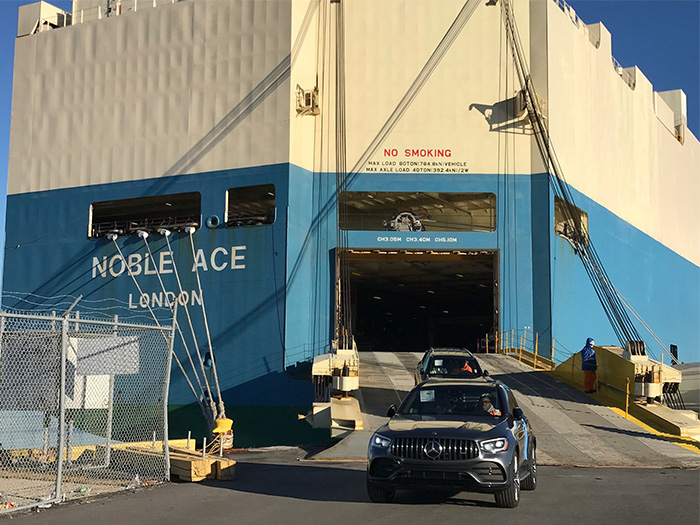 Mercedes-Benz is one of several major shippers using the Port of Baltimore to get over supply chain hurdles. On Monday, the car carrier Noble Ace delivered 1,800 new Mercedes-Benz vehicles at the port—including around 600 that had been scheduled to be unloaded on the West Coast.

The Mercedes-Benz shipment is among several recent strides made by the Port of Baltimore to help address supply chain issues.

Recently the port began handling fuselage components of the Airbus A220 series of aircraft. The MPA worked closely with shipping firm Wallenius Wilhelmsen, ocean carrier Airbus and logistics partner Louis Dreyfus Freight Solutions. Components are being loaded at the Port of Dalian in China, coming through the Panama Canal, and heading straight to Baltimore, from where the parts then head to an assembly plant in Canada.

The Port of Baltimore has begun handling Kubota farm and construction equipment on RO/RO vessels instead of containerships due to supply chain issues. Japan-based Kubota is one of the largest manufacturers of farming equipment in the world.

The port also continues to receive “ad hoc” ships—vessels diverted to Baltimore that were not on a regularly scheduled service call. Since July 2020, 26 ships have been diverted to the Port of Baltimore due to nationwide port congestion.

“The Port of Baltimore has had a successful year recovering from the effects of the pandemic, and has played a key role supporting the supply chain up and down the East Coast deep into America,” said Maryland DOT Secretary Greg Slater. “The infrastructure investments Maryland and its partners are making at the Port are laying the foundation for new jobs, greater capacity and even more business in the future.”

“Cargo continues to move through the Port of Baltimore,” said MPA Executive Director William P. Doyle. “Our creative RO/RO solutions for cargo and strong e-commerce abilities, combined with our efficient warehousing and distribution markets, are making us an extremely attractive option for cargo owners to avoid supply chain issues at other ports. We look forward to continuing to work closely with all of our partners, including our great truckers, to bring cargo through Maryland.”

The port also added new container services this year on two of the largest international container shipping companies in the world, Mediterranean Shipping Company (MSC) and Maersk. The MSC Indus 2 service is an Indian Subcontinent and Mediterranean service that includes an eight-ship string of 8,500 TEU vessels, while Maersk started a new Southeast Asia/Vietnam and China service through Baltimore including a string of up to 13 ships with carrying capacities of 4,500 TEU plus.

Last month, groundbreaking was held for Baltimore’s Howard Street Tunnel Expansion project, which will expand the CSX-owned tunnel to allow for double stacked container rail cars, clearing a longtime hurdle for the Port. It will also give CSX rail on the East Coast seamless double stack capacity from Maine to Florida. The project involves clearance improvements in the tunnel and at 22 other locations between Baltimore and Philadelphia. With the tunnel expansion project, Baltimore will be able to send double stacked containers by rail into the Ohio Valley and onto Chicago.

The Howard Street Tunnel project benefits from public-private investment from the federal government, Maryland, CSX, and others, and is expected to increase the port’s business by about 160,000 containers annually. It will also generate about 6,550 construction jobs and an additional 7,300 jobs from the increased business.

In September, the MPA and Ports America Chesapeake, its public-private partner at Seagirt Marine Terminal, welcomed four additional ultra-large, Neo-Panamax cranes. The cranes are undergoing thorough testing and are expected to be operational during the first quarter of 2022. Baltimore is one of a few East Coast ports with the ability to handle some of the world’s largest vessels, and the new deep berth will allow two of these massive ships to be serviced at the same time.